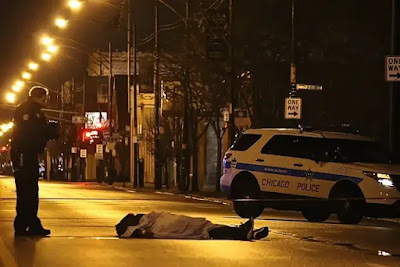 Friends, today we ponder a real brain-buster: how do the Democratic Mayors of our biggest cities, suffering massive rises in violent crime and, in particular, homicides, angrily dismiss offers of assistance from the federal government?  Wouldn't that be a gross disservice to the people who live in these cities, especially to the "Black" and "Brown" people (note the PC capitalizations, thank you very much) who represent the majority of crime victims?  It beggars belief.
The crime wave is no longer in dispute.  Here's just a sampling of the evidence:
https://chicago.suntimes.com/crime/2020/8/1/21350547/chicago-crime-stats-july-increase-murders-shootings
And so...why?  Why rebuff federal cooperation and outreach?  The answer is as simple as it is obvious: Trump-hatred.  Sheer irrational, myopic Trump-hatred.  Check out this article.
https://www.yahoo.com/news/clyburn-trump-election-delay-mussolini-163630617.html
And this one:
https://www.newsmax.com/politics/clyburn-barr-portland-feds/2020/07/20/id/978058/
So South Carolina Rep. Jim Clyburn views Trump as no different from Mussolini.  I suppose that represents an upgrade from the Hitlerian parallels that the Left usually draws, but, nonetheless, consider the audacity of Clyburn's claims.  He views Trump as a dictator, or at best as an aspiring dictator, and thus he views federal law enforcement as the embodiment of Trump's viciousness and his soaring ambitions.  The Feds, therefore, really are "stormtroopers," and the American people are currently living in fear -- fear not of criminals, who ARE killing them in record numbers, but of federal bureaucrats and law enforcement professionals, who are in fact trying to protect them, but who Clyburn and the Left view as willful participants in, and enablers of, Trump's reign of terror.
The delusional nature of these beliefs is incredible.  The isolation of liberals from reality, it would seem to me, has now reached a very dangerous level.  Their contempt for the President of the United States, for law enforcement, and, lest we forget, for roughly half of their fellow citizens, is TOTAL and UNALLOYED.  They have, in fact, turned on the very institution that they most adore in the world: big government!  They've turned on it because it is tainted by the leadership of Donald Trump.  That is how obsessive and neurotic their Trump-hatred has become.
What are the chances, under these circumstances, that we can hold a peaceful, orderly election in November, and that both sides will accept its outcome?  Slim to none.  President Trump is clearly very worried about our electoral process and its integrity.  He's also worried, so it seems, about the survival of our constitutional system of government and our democracy.  Well, he ought to be.  The sinews of that system and of that democracy are being stretched to the breaking point.
Posted by Nicholas Waddy at 6:16 PM