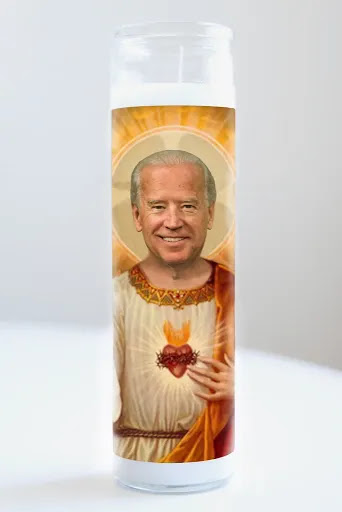 Friends, wonderful news: Joe Biden, a.k.a. Saint Joe, plans not just to save America from Trump -- he's also ready and able to save your soul!  Just ask Joe himself.  If you listened to his acceptance speech recently, you'll recall that a "battle for America's soul" is underway, and the surest route to redemption runs straight through Wilmington, Delaware!  No surprise there.  And this nonsense, believe it or not, is the theme of my latest article.  See what you make of it.

President Trump delivered a lot of memorable lines in his acceptance speech at the Republican National Convention. Among the best was his assertion that “Joe Biden is not a savior of America's soul.”

It was a reference to a key moment in Biden's own acceptance speech, in which the former Vice-President called on voters to “join a battle for the soul of this nation.” He declared, “This campaign isn’t just about winning votes. It’s about winning the heart, and yes, the soul of America.” Governors Kasich and Cuomo, among others, echoed this idea that America's “soul” is on the ballot.

In his speech, Biden framed his campaign as one of “hope and light and love.” Trump, by contrast, is “darkness” personified.

Biden particularly drew attention to President Trump's alleged observation in August 2017 that there were “very fine people” among the violent white supremacists in Charlottesville, Virginia — a smear that has been discredited and disproved on countless occasions. Trump was not referring to white supremacists, as he made clear at the time, and as he has been at pains to remind people since. This imaginary outrage in 2017 nonetheless marked the exact moment when, according to Biden, “I knew I'd have to run.” The “soul of America” demanded nothing less.

Trump is absolutely right to condemn Biden's sanctimonious and intentionally deceptive rhetoric. He is right, because of the emptiness of Biden's words. He is also correct, however, because Biden's arguments represent, at their core, a refutation of the Christian faith that Biden professes to hold. Biden is proposing himself as the savior of the nation, and of Americans' souls, when any true Christian knows that salvation comes only through Jesus Christ.

Biden, however, goes far beyond this, asserting that his campaign stands for “hope and light and love,” while President Trump has brought a “season of darkness” upon the land. This is strikingly moralistic, even pious, rhetoric for a party that claims to embody rationality.

What's worse, Biden, despite his Catholic roots, doesn't suggest God as the force — the only force — that can restore America to spiritual health. He nominates himself as America's redeemer. He claims that he, Joe Biden, can “Give people light.” He, the career politician, can and will illuminate the path back to righteousness.

This rhetoric isn't merely grandiloquent. It is blasphemous. It belies Biden's entreaty to the Almighty at the end of his speech, “And may God bless you,” for it is not God from whom Biden anticipates blessings, but from himself.

Sadly, this moral-spiritual fog, in which it is so easy to confuse oneself for God, is a persistent feature of left-wing ideology. Leftists are humanists: they are believers in the excellence, even the perfectibility, of humankind. They believe that a utopia can and will be built on Earth, if only the ignorant will heed the calls of the enlightened.

And who are the enlightened? Why, they are, of course — they, the left-leaning, “progressive” vanguard of a new age. It is from their glorious minds that the shape and structure of the promised utopia will spring, even though the Bible and common sense teach us that human beings are imperfect in their knowledge, their judgment, and their character, by definition.

Does any of this mean that Donald Trump, rather than Joe Biden, is God's candidate in 2020? No.

What it does mean is that, for all his bloviating, Donald Trump acknowledges that he is beneath God, and so are the rest of us. “In America,” he declared in his acceptance speech, “we don't turn to government to restore our souls. We put our faith in Almighty God." As we should.

Joe Biden is also a man of faith. The difference is that, when it comes to saving souls and redeeming a nation of 330 million people, Biden thinks that he is the key. Not God.

Joe Biden and many Democrats are fond of quoting Scripture. Let them heed, therefore, Matthew 15:9, “In vain do they worship me, teaching as doctrines the commandments of men.”

Simply put, Joe Biden is not Jesus Christ, and the platform of the Democratic Party is not the Scriptures.

If the American people cannot tell the difference, then sadly our “season of darkness” is only beginning.