Bring Back the Shah! 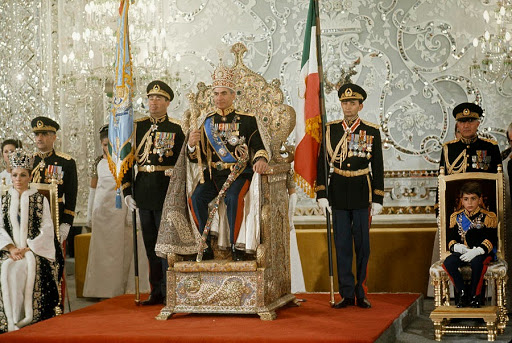 Friends, President Trump might want to start thinking of the Shah of Iran as a role model (for when he institutes a dictatorship, that is).  I mean, just look at that throne!  On the other hand, the Shah didn't exactly live long and prosper, so maybe "President of the United States" is...good enough?
This week's Newsmaker Show with me and Brian O'Neil focuses on many of the top stories capturing the headlines.  We discuss the Democratic convention and its remarkable lack of interest in the Democratic candidate for President, Joe Biden.  We're apparently supposed to vote for Biden by default, once we exclude Trump as a possibility because, well, he's Beelzebub and all...  In addition, I fulminate against the Dems' obsession with postal reform and call it what it is: the propagation of a baseless conspiracy theory.
Historically, Brian and I analyze the life and legacy of Bill Clinton, the effect of the U-2 incident in 1960 on the trajectory of the Cold War, the 1953 coup that ousted the nationalist Mosaddeq in Iran, and Hitler's accession to the "office" of Fuehrer after the death of German President Paul von Hindenburg in August 1934.
It's quite a show!  Can you imagine what your life would be like if you missed it?  All that regret, shame, despondency...  Perish the thought!  Tune in now.
https://wlea.net/newsmaker-august-19-2020-dr-nick-waddy/
Posted by Nicholas Waddy at 10:32 AM