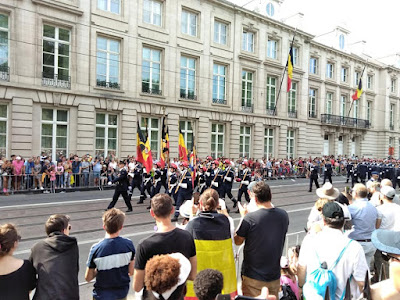 On behalf of the American people -- and especially this American, who happens to be in Brussels -- I wish the plucky little nation of Belgium a happy birthday on this, its national day!  Belgium, for those of you who don't know it well, took it on the chin in both world wars, falling to Germany, but the Belgians didn't quit.  They persevered, and after their liberation became key members of NATO and the EEC/EU.  Despite the recent deeping of European ties and institutions, the Belgians clearly remain proud of their own patrimony and heritage.  I wish them all the best!
Posted by Nicholas Waddy at 3:31 PM