A Fond Farewell to Robert Mueller 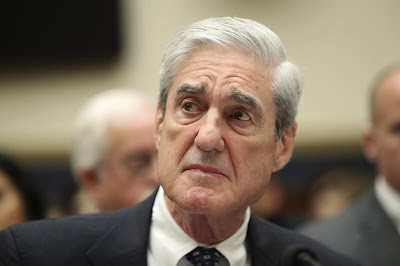 Poor Bob Mueller.  He's looking awfully haggard these days.  Who can blame him?  Half the country was counting on him to undo the 2016 election, and he failed them.  The other half of the country expected him to undo the election, and despised him for it.  In the end, we can say that, to a point, Mueller acted like a true professional.  Despite immense pressure to do so, he didn't conjure a case for impeachment out of thin air.  No doubt many of the people on his staff wanted to.  On the other hand, he pursued Trump and his associates adversarially, and he never showed the slightest interest in investigating the Clinton camp's "collusion" with Russia agents via Christopher Steele.  Kind of a big oversight!  Be that as it may, Mueller came and went...and I wish him a happy retirement.  The country can now move on -- although we all know that a hardcore of liberals won't.  They will keep the flame of "Russiagate" and "obstruction" burning a while longer.  More's the pity for them.

In other news, Boris Johnson has achieved his life's ambition: he's Prime Minister of the U.K.  He rises to that lofty position at a particularly challenging time, for Britain and its government.  He's determined to take the U.K. out of the EU on October 31st.  Most of Parliament is determined to stand in his way.  Can these two facts be reconciled?  Can Boris thread the needle and find a way of getting Parliament, the EU, and the British people on the same page?  I sincerely hope so, because the alternative could be a complete political meltdown.  Godspeed, Prime Minister!
Posted by Nicholas Waddy at 1:29 PM