Smoke 'Em If You Got 'Em, America! 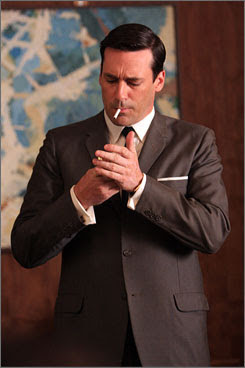 Friends, it wasn't so long ago that everyone smoked.  It always amuses me to read about WWII, when harsh rationing was the order of the day, and millions of people starved to death, but no country on earth felt bold enough to end the production of cigarettes.  Priorities, right?

Check out this story about Netflix's efforts to drive smoking out of popular entertainment.  I don't care for it.  Don't get me wrong -- I've never smoked, and I don't encourage anyone to do so.  But isn't this a free country?  Isn't it up to the individual to "pick his poison," as it were?  And, as this article suggests, isn't it absurdly hypocritical to ban one vice while we laud others, like pot-smoking, alcohol abuse, and promiscuity?  The upshot is, of course, that Netflix feels entitled to decide for us which vices are truly nasty.  I say...I'd rather decide for myself.

You might also wish to read this article about what a Boris Johnson premiership may portend for Brexit.  I agree that it won't be smooth sailing, but I still think Boris can get the job done.

Lastly, congrats to the conservatives in Greece, who have retaken control of parliament.  The decline of socialism is always to be celebrated, especially when it happens in the cradle of democracy and Western Civilization!