Welcome to the Party, Tom Steyer! 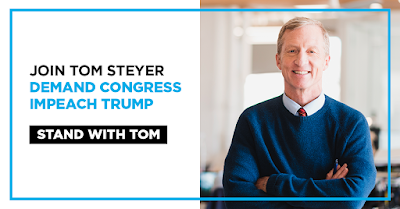 Friends, today I was really excited to learn that billionaire wingnut Tom Steyer may be throwing his hat in the ring for the Democratic presidential nomination.  Steyer is obsessed with climate change, but he's even more obsessed with impeaching Trump for, you know, all those bad things that Trump did.  Steyer is relentless, and he's spent tens of millions of dollars trying to organize support for impeachment.  Why would this please me?  Because impeachment is a losing issue for Democrats.  There's a reason that Nancy Pelosi and Chuck Schumer are running as far away from the issue as they can get.  There's a reason why the media and the Dems never raised the issue in the recent debates.  Impeachment will surely fail, but it's worse than that -- impeachment has the potential to tear the Democratic Party apart.  Having an impeachment true believer on stage at the next Democratic debate, therefore, would be a gift of incalculable value to President Trump and the Republican Party.  So, I say, join the party, Tom!  The water's nice and warm.  Dive on in

In other news, your right-wing hero, Dr. Waddy, will be heading to Europe this week, so I regret that my posts may grow somewhat spotty.  Think of it as a fact-finding mission.  "Fun" is the main fact I intend to find, but I also expect to confirm that the USA is the greatest country on Earth, and socialism stinks!  I'll share my impressions throughout the trip, and I will share some photos with you as well.  I'll be hitting Britain, the Netherlands, and Belgium.
Posted by Nicholas Waddy at 12:06 AM