It's Always About Race With These Democrats... 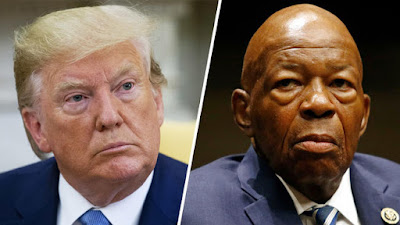 Friends, I'm back from my European vacation, and I'm ready once again to do battle with all America-hating leftists!  Bring it, Bolshies!

Now, you would think that a President who comes to the defense of federal law enforcement professionals who are smeared by an irresponsible Congressman would be praised for doing his duty, right? Well, no, the media and the Democrats instead have fallen back on the usual tired accusations of "racism", claiming that Congressman Elijah Cummings, as a Civil Rights icon, is beyond reproach. Moreover, they say that any suggestion that his district is dysfunctional, despite or because of his leadership, is "racist."  Well, all this is par for the course, and there will be plenty more of it before Nov. 2020.  Of that we can be sure.

What I would like to suggest, however, is that those who live by the (racist) sword can also die by it. The Democratic Party is full of people who reflexively believe that Republicans are racist, and they will reflexively (and largely ineffectively) accuse us of racism. So be it. The problem for the Left is that it is increasingly bedeviled by racism allegations itself. Leftists, jockeying for position within the movement, running for office, or just trying to set the liberal agenda, are increasingly using thinly-veiled and poorly-documented charges of racism against one another. Most recently and most famously, Kamala Harris implicitly accused former Vice-President Joe Biden of making common cause with racists in the last Democratic presidential debate. Biden was bewildered, as liberals often are when irresponsible charges of bias are leveled against them. They consider themselves above suspicion, naturally. I tell you, friends, the Left is addicted to a victimhood culture and to making unlimited and invariably false charges of bigotry. The potential for mischief that this affliction can cause within the liberal movement is vast.  We will undoubtedly see the disease manifest itself in the debates on Tuesday and Wednesday, and there's no telling how many Democratic candidates for President will be felled by racism or sexism allegations by the time the race has been run. None of this will enhance the credibility of the Democratic Party and its eventual candidate for President, needless to say, and none of it will make their constant assaults on President Trump for his "racism" any more compelling either. With any luck, in 2019 and 2020, we are seeing the last gasp of the Left's race-baiting politics. But, in the meantime, folks, it will get worse before it gets better. You've been warned!

Check out this article, which proves my point that the Left is eating its own:

And, speaking of race, the Democrats continue to listen to the siren song of reparations.  If we're lucky, this will be a big issue in 2020, because if it is it will be an electoral disaster for Democrats!