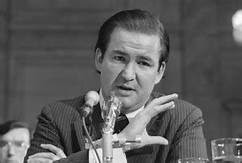 Friends, ever since Patrick J. Buchanan challenged George H.W. Bush for the Republican presidential nomination in 1992, I've been an admirer of his.  He ran again in 1996.  Throughout his career he's been an unapologetic voice for nationalist conservatism.  He cut his political teeth in the Nixon White House and served Presidents Nixon, Ford, and Reagan admirably as an advisor.  He's written countless articles and books, focusing especially on issues of foreign intervention (which he generally opposes) and immigration (of which he's generally skeptical).  He celebrates and defends Western Civilization.  He is, in short, a great American, and while for years he was, in truth, a voice crying out in the wilderness, in the Age of Trump he seems more like a prophet and a sage.

Imagine my pleasure, therefore, upon reading this article by Pat Buchanan, which repeats many of the themes you've seen in this blog over the last few days:

Remember, Buchanan lived through the turbulent Vietnam War and Watergate years, when many American leftists competed with each other to show disrespect to America and its symbols.  Is history repeating itself?  Will the anti-Americanism of the Left smooth the path for a long-term Republican, conservative resurgence?  We shall see.

In other news, I continue to applaud the decision of the Trump administration to redouble its efforts to include a citizenship question on the 2020 Census.  The Supreme Court DID NOT invalidate the idea of adding such a question -- it merely invited the administration to revise its rationale.  The question is perfectly reasonable, needless to say, and it ought to be asked, so that future redistricting efforts can be based on eligible voters or, better yet, actual voters.  Why are the Democrats so afraid of "one man, one vote"?  Because they don't much care for the American electorate in the first place.  That's why they're desperately trying to import a new electorate.  It's victory at any price for the Dems.  Let's not allow them to hold the Census hostage to their whims.

And kudos to Italy's Interior Minister Matteo Salvini for taking a hard line against illegal immigrants and the "aid workers" who enable them.  Italy is facing a migration challenge not unlike our own at the southern border.  Italy is also starting to figure out that, if you give migrants what they want (the ability to live in Europe), they will only come in larger numbers!  On the right we call this "common sense."