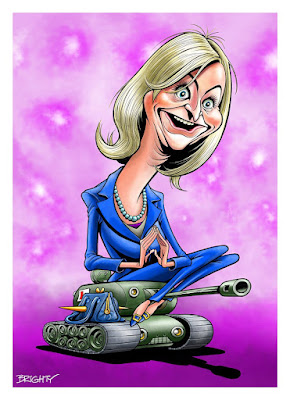 Friends, ready or not, the U.K. has a new prime minister, Liz Truss.  Conservative Party members have chosen her in a bruising contest that made many of them second-guess their decision to cashier Boris Johnson.  Some call Liz "Theresa May 2.0", which is, in case you're confused, by no means a compliment.  She loves killing Russians (indirectly), she likes tax cuts and deregulation, and (somewhat incongruously, given her alleged Thatcherism) she's got ambitious plans to intervene in the energy market to spare the British people the agony of paying market rates.  Most would say she's taking on a thankless job, since steering the ship of state through such troubled economic, financial, and international waters will be darn near impossible.  Time will tell.  One thing's for sure, at any rate: her hairdo won't make small children cry, as Boris's unruly mop sometimes did.

In other news, Russia is escalating its economic warfare against its key European customers for gas and oil, and it's a strategy that might bear fruit, because Europeans are already paying through the nose for energy.  Not to worry, though -- the Eurocrats will solve this problem with (you guessed it) SUBSIDIES galore!  That might work in the short term, but spending yet more money won't cool inflation any.

You probably don't know much about it, but in recent years Colombia, Mexico, and Chile have all succumbed to leftist leadership, at least at the presidential level.  We need to do everything in our power to prevent Latin America from embracing Venezuelization.  I, for one, applaud the people of Chile who recently rejected an effort to impose a new leftist constitution on the country.

Finally, DJT won a small but potentially significant victory in his legal battle against the DOJ and FBI: a federal judge agreed to his request to appoint a "special master" to go through the items seized from Mar-a-Lago to determine if the feds have carted off anything they shouldn't have.  Seems a bit late for that, mind you.  The G-Men have probably photocopied everything of interest, up to and including Melania's underwear.