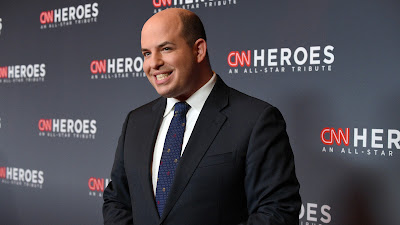 Friends, this handsome buck is Brian Stelter, formerly of CNN, and about to become a Harvard Fellow focused on "threats to democracy".  How about that!  I know many conservatives were chuffed when this Trump-hating loon was canned, but apparently he's landed on his feet, and that should surprise precisely no one.  The Left takes care of its own.  Okay, occasionally it eats its own, but, for the most part, if you serve "the Cause", you can bet your bottom dollar that no meaningful legal, physical, professional, or financial harm will come to you.  As a matter of fact, the more strident and reckless you are in your condemnations of "right-wingers", the more richly you will be rewarded.  Disagree?  Then, please, name for me one prominent figure on the Left who EVER got his just desserts...  Seriously.  I'm waiting.  And we wonder why these people are so shameless?  Life has taught them to be!

In other news, here's an interesting, if unnecessarily long, exploration of the foreign policy arena, and the many challenges the U.S. and the West face moving forward.  I agree with parts of this analysis and strenuously disagree with others, but the fact remains that things are about to get hairy internationally, and we're not in a very strong position -- militarily, economically, or politically -- to face these obstacles and overcome them.  That could create a dreaded "power vacuum".

File this one under: LOL.  The New York Times is facing an uprising among its employees, because A) they don't wanna go to work, and B) they charge that the Gray Lady is -- gasp! -- a racist old hag.  It's always fun to watch these woke a**holes turn on each other...

Of all the stories today that might have a determinative effect on the November elections, this one stands out: inflation remains distressingly high.  The Dems will respond by boldly ignoring the problem and waving their arms and encouraging us to "save our democracy(!)", but it's hard to imagine how an economic environment this adverse could be good for Team Blue.

We now know one way that Russia is responding to Ukraine's advances on the battlefield.  They're switching off the lights in much of Ukraine.  Frankly, I'm stunned that they didn't obliterate Ukrainian infrastructure a long time ago.

Finally, don't look now but there's political violence in Italy...against conservatives!  In other words, there's nothing to see here, so move along.  Expect the usual media snow job.