Fascists At The Gates 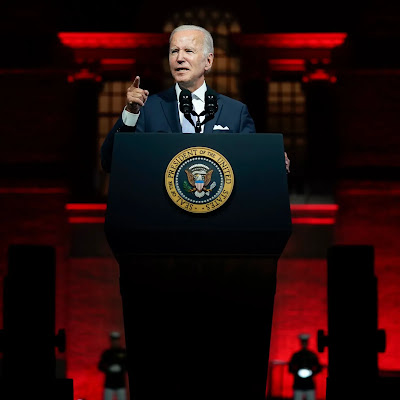 Friends, as you all know, Sleepy Joe woke up extra grumpy from his nap and decided to inveigh against "MAGA Republicans" and the terrible threat they/we represent.  Democracy is hanging by a thread!!!  And DJT is attacking that puny thread with a set of over-sized garden shears!!!  AHHHHHHHHHHHHHHH!!!  Have you soiled yourself yet?  If so, then you might be ready to...vote blue in November.  And, if you do, armageddon might be held at bay, at least until the next election cycle.  Whew!

This brand of "anti-fascist" alarmism has become the stock in trade of Democrats since Donald Trump rode down the escalator back in 2015.  In fact, they've doubled down, and re-doubled down, so many times we've all lost count.  The effectiveness of this strategy, politically speaking, is what Brian and I investigate on this week's Newsmaker Show, in addition to several other pertinent issues, including Britain's new P.M. Liz Truss, the state of the polls, the appointment of a "special master" to review documents seized from President Trump's home, Gorbachev's warts (but not his port-wine stain), and more!

Seems like IF you were a decent, non-fascist American, you'd tune in, no?  Oh, heck -- even the fascists should give this week's show a chance.  What have you got to lose?

In other non-news news, Bill Barr thinks the DOJ has what it needs to indict President Trump.  How exactly would he know this?  Presumably because he reads the New York Times.  Based on its coverage, I'd say the DOJ has a pretty good case against Trump for kidnapping the Lindbergh baby...  Bear in mind, though, that this RINO was TRUMP'S CHOICE for Attorney-General.  What chance did a guy like Trump ever have if his own cabinet and closest advisors were plotting against him?

Finally, Americans' satisfaction with the public school system is low and declining, so I have to ask the question: when will Americans be ready to embrace an alternative -- ANY alternative -- to socialized education?

Posted by Nicholas Waddy at 5:55 PM