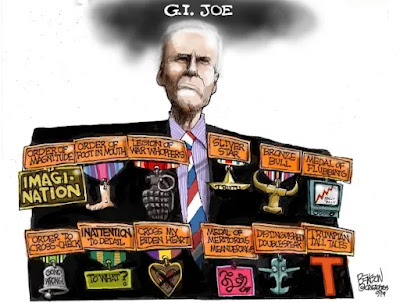 Friends, for the fourth time, President Biden has contradicted U.S policy on Taiwan by promising direct U.S. military intervention there, while his administration simultaneously claims that no policy change has occurred.  Wow!  And, just for clarification, we're crystal clear on the fact that, for Ukraine, which we recognize as an independent country, we won't intervene, but for Taiwan, which we recognize as a part of communist China, we will intervene if those impudent Chinese dare to take even one step into their own territory!  Makes a lot of sense, doesn't it?  This guy Biden gets it.  Now, following his (flawless) logic, all the Ukrainians need to do if they want U.S. Marines fighting in the streets of Kherson on their behalf is to voluntarily surrender their sovereignty to Russia.  Then we'd have to invade!  Oy.  Sometimes you just have to scratch your head...

Meanwhile, scumbag lawyers (is there another kind?) have convinced some of the migrants who were flown to Martha's Vineyard by Gov. Ron DeSantis to sue him.  Could federal charges against DeSantis be around the corner too?  Don't be shocked if it happens.  The Dem plan for victory in 2024 is fast revealing itself: put ALL the Republicans in jail, or at least tie them up in legal knots, and Team Blue wins by default!  I mean, that is the purpose of the law, right?  To harass your political enemies?

Posted by Nicholas Waddy at 8:20 PM