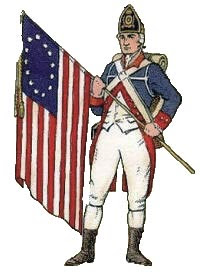 Friends, my (metaphorical) musket is always trained on the enemies of liberty!  Recently, I sounded off on the evils of Big Tech, which is seeking to silence voices of which it disapproves, including that of President Trump.  I told Sputnik News exactly what I think of that kind of Bolshevist thought control!

Meanwhile, the battle continues to rage over Georgia's Voter ID law and the Dem/progressive campaign to make Georgia pay for its insolence.  President Trump is calling for Republicans, conservatives, and patriots to boycott companies like Coke and Delta which are buckling under to leftist pressure.  I'm torn, personally.  I hate the politicization of everything, even soda pop and air travel, but the truth is that the squeaky wheel really does get the grease.  If the Left leans on corporate America and the right sits on its hands, well, you do the math...  Anyway, it's nice to see Georgia standing up for itself and standing by its new law, and it's refreshing that the PGA, at least, is refusing to cave.  Baseball is officially no longer "America's game", if you want my opinion!  The good news is that these small-minded boycotting tactics may well backfire: Georgians don't appreciate the "punishment" that the Left is now inflicting on them.  I predict Georgia will be back in the red column in 2022!

In other news, there's some confusion about whether the U.S. is seeing another coronavirus "surge", but there's little doubt that there is a surge in other parts of the world that are lagging in vaccine distribution.  Perceptions of risks relative to the dreaded virus continue to have little to do with actual patterns of risk, however.

Could Republicans be competitive in New Mexico's upcoming House special election?  Don't bet on it, but if the GOP candidate were to win, it would show that the Dems are in very serious trouble in 2022.

I don't know what to make of the latest DC sex scandal involving Florida Rep. Matt Gaetz.  He denies all the charges, so we just have to hope that the DOJ investigation will be (uncharacteristically) fair.

The "beauty" of cancel culture is that eventually it leads to the cancellation of everyone and everything.  Even Robespierre eventually got Robespierred!  I believe it's called a "purity spiral" or something to that effect?  Anyway, it's nice to see Barack Obama get dinged for his insufficient wokeness...

Now here's an intriguing story.  What do you suppose would be the media reaction if a troubled member of the Proud Boys, or just a wide-eyed Trump supporter, drove his car into a barricade around the U.S. Capitol and killed a police officer?  Would tempered analysis of the perils of mental illness ensue?  Yeah, right.  The media would beat the drum of "right-wing extremism" and "white supremacy" for days, if not weeks.  Curious, then, that the partly political and racial motivations of the recent attacker at the Capitol don't seem to trouble the press or the reigning Democrats at all...

SUVs for me, but not for thee?  Transportation Secretary Pete Buttigieg got caught staging a photo op.  He wanted to be seen arriving at a Cabinet meeting via his eco-friendly bike, instead of a fleet of SUVs.  You gotta love these people!

Finally, heed the words of Charles Barkley.  The modern political and media environment really is designed to foster hatred, bitterness, vengeance, and anxiety.  It's toxic, simply put.  Here at WaddyIsRight we know this and try to analyze politics and cover the news more responsibly.  Sure -- we mock the Dems and their acolytes.  A good laugh at their expense is more than called for.  But hate Joe Biden?  Despise the woke SJWs?  Froth with rage at the decline of Western Civilization?  No thanks.  Life is too short.  Plus, I've met plenty of leftists.  They're arrogant and blinkered, but very few are bad people.  Cut off the constant flow of misinformation that deludes them, and most would return to sanity and decency in short order.  That's why Trump's number one error was not damming up the rivers of bile flowing out of the mouths of "journalists".  But I digress.  America just isn't such a bad place, and Americans aren't such bad people.  It's a shame, however, that our two-party system and our media is expressly designed to conceal these essential truths from us.

Posted by Nicholas Waddy at 2:26 PM