Giving Them Their Due 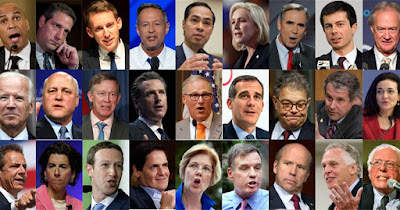 Friends, lest we forget, Democrats are people too.  Sometimes, therefore, we have to listen to what they have to say, if only to give ourselves a reality check and consider whether we've retreated into a thought bubble...like so many of them have!

They make a fair point.  When Krebs praised the 2020 election as being the most secure in our history, he was probably thinking of his own efforts to protect the networks of federal and state election authorities from foreign hacking.  Well, he may have done a good job in that respect.  The problem is that, aside from Sidney Powell, no one is much concerned about foreign interference in the 2020 election.  If you watched President Trump's speech yesterday, he made it clear that the election was corrupted not from without, but from within.  It's the election authorities themselves who may have stolen this election, in other words, so poor Chris Krebs may have been spinning his wheels.  Be that as it may, his firing may have been excessive.

And consider this article, which argues that Biden "won" in 2020 because Democrats managed to reduce the third party vote, and garner almost all the anti-Trump vote.

The national results say that Biden got 51% of the vote and beat Donald Trump by 4 points.  And that, frankly, is the best argument for why we should accept Biden's "win" -- if you win nationally by four points, it's not implausible that you will squeak out narrow wins in the battleground states as well.  Fair enough.  But we should also ask how the Democrats marginalized third party candidates in 2020.  They did it by pruning the "news" of all coverage of third party candidates, except the coverage that mocked Kanye West, of course.  The Green Party's mere existence was not acknowledged by the mainstream media.  It's pretty hard to win votes when newsmen pretend you're invisible.  In addition, the media made the calculated decision to ignore any and all stories that made Biden look bad.  Hunter Biden?  Who's that?  Tara Reade?  Never heard of her.  By the end of the campaign, the mainstream media was one big press agent for Joe Biden.  That naturally suppressed the third party vote, because anyone not fond of Trump would vote for Biden automatically -- you know, that guy without flaws of any kind...  Lastly, the Dems cynically maneuvered to exclude the Green Party from the ballot in 2020 in many key states, like Wisconsin and Pennsylvania.  Why would the Dems not want voters to have options?  Duh!  It's because they wanted every Trump hater to have only one choice: Biden.  You may not have liked him, but you had to lump him.  So, in conclusion, the article is right that the Dems very successfully united virtually the entire anti-Trump vote in 2020, and that helps to explain why Biden performed so well.  The question that lingers is...how many of those "votes" that Biden received came from people legally entitled to vote (once!)?