All Hail Chairman Biden, "Dear Leader" of the People's Republic of America! 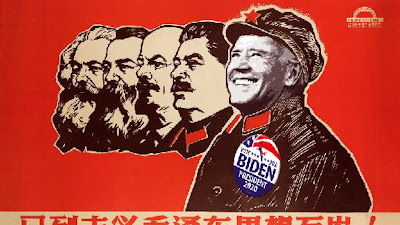 Friends, as we kiss our liberties and our constitutional system of government good bye, my latest article offers heartfelt congratulations to the incoming Commander-in-Chief, and our new dark lord, Joseph R. Biden!  The pivot to "WaddyIsLeft" can't be far behind, right?  Read on...

Now that the electoral college has spoken, it is high time that we Republicans salute and recognize the next “President” of these United States, Joseph R. Biden — Delaware's favorite son!

Mr. “President-Elect,” you and your fellow Democrats proved one thing beyond a shadow of a doubt during the 2020 election cycle. When it comes to cheating, you have the GOP thoroughly outclassed. In fact, in fraud and malfeasance, you blew us totally out of the water. Kudos!

Just think about it: going into the election, you knew that, if the rules remained unchanged, and the votes were counted in the careful, deliberative, mostly legal way that they always have been, you risked losing. But you were having none of that!

Using a horrific pandemic as a pretext, you watered down the requirements for mail-in voting, ignoring state and federal laws and the U.S. Constitution itself, in the full knowledge that, well, your lawyers were better than our lawyers, we Republicans wouldn't dare to impede any American (dead or alive, real or imaginary) from exercising his or her right to vote, and — heck! — if we did have the gall to complain, the press would simply ignore it anyway.

You knew, in short, that you could game the system in your party's favor and get away with it...and so you went for it! Bravo! That's “the American way,” right? Keep your eyes on the prize, and let nothing, and no one, get in your way.

In addition, Mr. “President-Elect,” you notched another notable success: you corrupted the media as no presidential candidate before you ever has. Sure, the major newspapers and broadcast networks have always been biased in favor of Democrats, but previously they concealed their bias beneath a patina of professionalism and objectivity. No more!

You sounded the clarion call to every “journalist” to become, in effect, an unpaid Democratic Party activist, as well as an agent of the “Resistance,” proudly flying the banner of visceral Trump hatred. You challenged “journalists” and social media watchdogs alike not just to ignore stories prejudicial to your campaign, but to suppress them — free speech be damned!

In the process, you denied tens of millions of Americans who might otherwise have been on the fence about supporting you the news they needed to make an informed decision. By simultaneously maneuvering to keep third party candidates off the ballot, you contrived to give voters a simple choice: vote for Joe Biden, the genial, patriotic guy about whom the media says only nice things; or vote for Donald Trump, legendary super-villain, KKK member, and jailer of small children. Brilliant!

And, given that binary choice, by the slimmest possible margin in the battleground states, the voters reluctantly chose you. Hooray!

Sure, the media is now held in almost universal contempt, and Americans will probably never again agree on a common set of facts, but it was a price worth paying, right? Donald Trump got what he had coming!

But your triumphs don't end there, Mr. “President-Elect.” Before choosing to run for the presidency, you supervised an effort to monetize the Biden family name on an unprecedented scale, placing your troubled son Hunter, recently discharged by the Navy because of his drug use, at the helm. When stories about your ever-so-discreet involvement in Hunter's corrupt schemes threatened to derail your candidacy, you rallied your supporters and your confederates in the press to condemn the allegations as “discredited,” “baseless,” and even — this one takes the cake! — as “Russian disinformation.” Well played!

Hunter himself you kept hidden away, although you really needn't have bothered, since none of your pet “journalists” would dream of asking him a question anyway, unless maybe it was about his favorite flavor of ice cream...

As a consequence, you will become “President” despite being compromised by a host of contacts and deals with foreign enterprises and governments. But hey, what the American people don't know can't hurt them, right?

In fact, one could make the case that, as a swamp monster extraordinaire yourself, you'll feel right at home back inside the Beltway, cutting deals and cozying up to the very special interests that brought you to these dizzying heights. The Oval Office, in that sense, should fit you like a glove, Mr. “President”! One might even say, in the words of the greatest philosopher of modern times, Beto O'Rourke, that you were “born to do this,” right? After all, you've got 47 years of experience being a sleazebag. Who's better prepared for the presidency than you?

Lastly, Mr. “President-Elect,” kudos on being elevated to the highest office in the land despite your obvious and accelerating mental infirmities. Who would have thought that a 78-year-old man evincing senility could be electorally competitive in the first place?

You resolutely and wisely refused to answer questions about whether you were medicated or under treatment for your mental defects, and you likewise refused to disclose the results of any test documenting your mental acuity (or lack thereof).

Best of all, though, you showed up and delivered credible performances at key moments in the campaign — your acceptance speech at the Democratic National Convention and the two televised debates, for instance. You didn't drool, you didn't soil yourself, and you seemed to remember who you were and what was being discussed. That's what we call a maximum effort, Mr. “President-Elect”! Well done.

The good news is that your perseverance and tenacity were rewarded by the voters, and now you can relax. With the electoral college and Congress in your back pocket, you can coast to January 20th, after which you can turn to jelly for all that the Democratic Party cares. You fulfilled your vital historical mission — the obliteration of Donald J. Trump — and now you can turn over the reins to your fellow swamp creatures. Whether you remain alert, awake, or even alive from this point on is a subject of little import.

So, in conclusion, congratulations to the man who will soon be acclaimed as our 46th President! No presidential candidate — let's be honest — has ever had the deck stacked more decisively in his favor, and you, Sir, managed not to screw it up! Hip hip hooray!

America may or may not be a functioning democracy from this point forward, but whatever it is, or chooses to call itself, you — by golly! — will be nominally in charge of it.

And thus we, your dutiful subjects, nominally salute you.

Posted by Nicholas Waddy at 6:49 PM