Could CBS Be Next On The Chopping Block? Say It Isn't So! 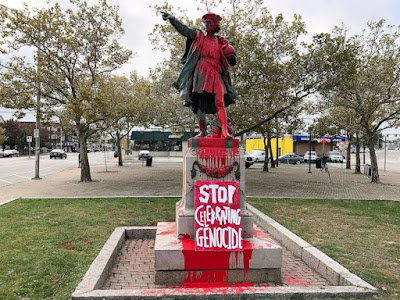 Friends, the sad truth is that the America-haters are winning: they're pushing successfully for changes to school curricula, for the removal of "offensive" statues, and for the renaming of buildings, streets, football teams, and other cultural artifacts, all to advance the narrative that traditional America was a bastion of oppression and racism, and our country needs to transform itself before it can be redeemed.  Case in point: Columbus statues have been coming down by the dozen this year, and the rise of BLM explains much of the historical carnage:

My view: Columbus wasn't perfect, and he was implicated in some serious crimes, from a modern perspective, but our contemporary American society and indeed Western Civilization is predicated on Columbus's exploits.  It would be futile and hypocritical to disown the man who made our country and our world what it is.  What's more, blaming Columbus for "genocide" is absurd.  He had no intention of committing genocide, and didn't engage in genocidal behavior himself.  It was mostly European diseases that killed millions of Native Americans, and the LAST thing Columbus would have wanted to do was annihilate his work force.

What's the title of this post all about?  CBS is the Columbia Broadcasting System.  Its name thus perpetuates (and celebrates) the "genocide" of Native Americans.  I say, BAN CBS!  Burn it to the ground (peacefully, of course)!

In other news, is it possible that Mini-Mike has met his match in the Florida Attorney General?  Mike Bloomberg is spending millions to pay the fines and penalties owed by Florida felons.  That will allow them to vote, and he assumes they'll vote for Democrats (lawless desperadoes normally do).  This may, however, be a violation of Florida law...and it's certainly a violation of the spirit of the law recently passed by the Florida legislature, which mandates that felons pay off their debts to society before they regain the right to vote.  Bloomberg seeks to bypass that legal and moral obligation.  At the very least, those who benefit from Bloomberg's blood money SHOULD NOT be permitted to vote in November.

And, you may well ask, how confident can we be that a vote cast for Trump will be duly counted?  This story puts that question in perspective:

The most secure way to vote, as always, is in person at a nearby polling center.

Posted by Nicholas Waddy at 2:23 PM