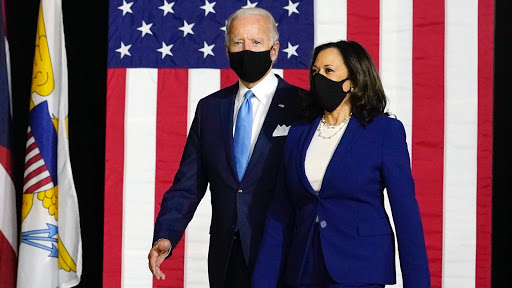 Friends, the Democratic National Convention is now in the books, and it's official: it will be Trump-Pence versus Biden-Harris.  I watched the addresses by Sleepy Joe and the Kamster, and I have a few thoughts.

For one thing, we have to acknowledge that neither Biden nor Harris "dropped the ball" and humiliated themselves.  Kamala Harris is a smart woman and a smooth talker.  She didn't miss a beat, and she kept things positive and optimistic -- usually a smart move in American politics.  She also defied my expectations.  I assumed she would be Sleepy Joe's "attack dog," and maybe she will be, but she wasn't at the convention.  She seemed like a nice, patriotic lady introducing herself to America.  That sort of speech will do the Dems no harm.

Second, Joe didn't crash and burn either.  He exceeded my expectations, insofar as he read his speech without tripping over it or having a stroke.  He was even coherent.  The miracles never cease!  And that, I think, is a danger for the GOP: the bar for Joe Biden has been set so low that it won't be that hard for him to meet it, and even rise above it.

Third, Kamala's address was almost entirely lacking in policy prescriptions of any kind.  Joe Biden did address policy, but only in the broadest, most schematic terms.  He promised to fix every problem, and protect every (popular) interest group, but he said almost nothing about how he would do it.  Well, that's par for the course.  The American people expect empty platitudes.  They got them this week, and how!

Fourth, the DNC was designed to pitch the Democratic Party as a moderate party, despite the fact that it has advanced some of the most radical proposals in our nation's history.  The tax increases and curtailments of liberty that the modern Dems would inflict on us would be punishing, and yet you'd never know it listening to their rhetoric, which is all Trump-hatred, on one hand, and sweetness and light, on the other: "compassion", "empathy", "equality", "justice".  How nice!

In a nutshell, the DNC was carefully scripted, and it was expertly enacted so as to, well, mislead the American people.  It will do the Dems no harm, and, assuming that any undecided voters were watching, it should even do them some good.

The challenge, then, is to confront the voters with what the Dems truly are, and what they truly believe in, when the cameras aren't running, and to expose the emptiness of so much of what they have to say.

The best case scenario, my friends, is that the street thugs who are battling nightly with the brave men and women of law enforcement -- some of them BLM, some Antifa, and some just miscellaneous left-wing nutjobs -- will become the real public face of the American Left.  The media wants to avoid that, but let's face it: sometimes Molotov cocktails speak louder than desiccated Delawareans.  This may be one of those times.

We shall see.  The Dems have thrown down the gauntlet.  For the most part, they are going to "play nice", it appears, and let the media do their dirty work for them.  Not a bad strategy.  We just have to hope that the American people are one step ahead of them.

Posted by Nicholas Waddy at 3:59 PM