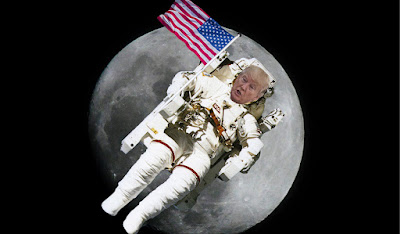 Friends, as the media fixates on its misrepresentations of the President's tweets, the "real America" (I've come to appreciate that phrase) is recalling one of the greatest moments in human history: the first moon landings in July 1969.  We must not rest on our laurels, though, so the Trump administration is pushing ahead with a revitalization of our manned space program, and with a plan to put Americans back on the Moon within five years.  I couldn't be more supportive!  Of course, one assumes that, when the first Orion capsule puts an American in space next year, the media and the Democrats will denounce it as a fascistic stunt.  And the Moon?  Just one more planetoid for Trump to wreck, naturally.  But you and I know better: man's destiny lies in space, and it's America, first and foremost, that will take us there.  Trump and Pence are doing their part.  Bravo!