A Profile in Courage: Susan Collins 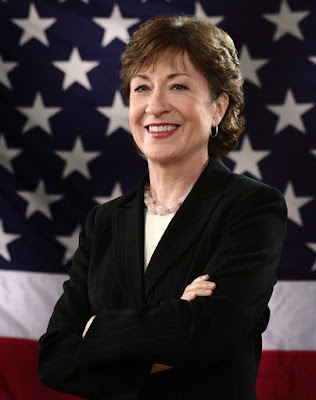 Friends, it's hard to find anyone in politics who merits the label "hero" or "heroine," but I believe Maine Senator Susan Collins qualifies.  Under intense pressure to reject the Supreme Court nomination of Brett Kavanaugh in 2018, Collins stood by the basic principle of American justice that a man, or a woman, is innocent until proven guilty.  Kavanaugh was by no means proven guilty, and so Susan Collins gave him the benefit of the doubt.  Imagine the damage we could have done to American justice if she (and Joe Manchin in West Virginia) had not stood up to the vitriolic Kavanaugh-haters...  She deserves credit, and she deserves to win reelection in 2020.  If you're so inclined, please donate to her reelection campaign.

Also, take a gander at this excellent analysis of the controversy over the addition of a citizenship question to the 2020 Census.  Such questions have been a fixture of many censuses, and many federal surveys, and only recently has the Left discovered that asking a simple demographic question is, in fact, "racist" and intimidating.  For some reason, asking a person their race, religion, or gender is fine, but citizenship?  Oh no!  Heaven forbid.  I sincerely hope that the President will succeed in adding a citizenship question to the upcoming Census.

Finally, check out this good news about apprehensions at the border.  Mexico's actions seem to be bearing fruit.  We shouldn't become complacent, though.  We still need to build the Wall, and we need to keep maximum pressure on Mexico's government.  They can and will backslide, if we let them.  That's one more reason to reelect President Trump.  A Democratic President would undoubtedly let the border spiral totally out of control.  Donald Trump is our only protection from that miserable fate.