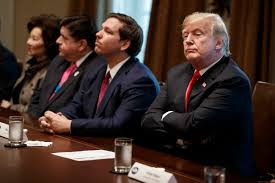 Friends, I'm no political genius, but it seems to me that something mighty important may have happened in the last couple of days: friction began to develop between the two men most likely to be the Republican nominee for president in 2024.  (That would be Donald Trump and Ron DeSantis, in case you've been living under a rock.)  DeSantis was absent from Trump's big rally in Miami, and the day before the rally Trump coined a new nickname for the Florida Governor: "Ron DeSanctimonious", which I guess is kinda witty, although I hadn't noticed that DeSantis was any more sanctimonious than a typical politician.  Anyway, that's neither here nor there.  I've always assumed that, if Trump ran, DeSantis would stay on the sidelines and hope to become Trump's running mate.  Instead, DeSantis may be snubbing Trump, and Trump may be drawing the logical conclusion that DeSantis plans to run against him, not with him.  If you want my two cents, this is bad news.  The Republican Party needs to be united in 2024 to win, and a Trump vs. DeSantis matchup, assuming Trump remains "at liberty" rather than in the slammer, will almost inevitably result in a Trump win, a DeSantis loss, and then an embittered DeSantis and quite a few frustrated, disappointed Republicans.  My hope, therefore, is that, when Trump declares his candidacy, as he almost certainly will, we Republicans will unite behind him.  I have grave misgivings about another Trump candidacy, but I'm not naive enough to think that there's any Republican could beat Trump in the primaries, or who has Trump's visceral connection to the average Republican voter.  In 2024, therefore, I suspect it will be "Trump or bust" for the GOP, as it was in 2016 and 2020.  Don't agree?  Hey, prove me wrong.

Finally, the Left's calls for Biden to step aside and announce that he won't run for reelection have already started -- in anticipation of a drubbing on Tuesday -- but you know this chorus will grow louder in the days and weeks ahead.  How unanimous will it be among Democrats, and how inclined will Biden be to listen?  We shall see.

Posted by Nicholas Waddy at 9:29 PM