Falling Off the Generational Cliff 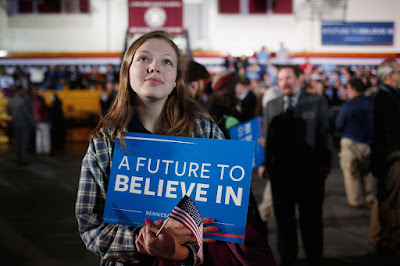 Friends, as we dissect the exit polls and election results, one thing stands out that I didn't mention in my initial analysis: young people voted overwhelmingly for Democrats.  Now, they did so in 2020 as well, and they've leaned blue for a long time, but it's a matter of degree, and we really got hammered with the under-30s this cycle, as you'll see in the article below.  There are several reasons that are particular to this year, like the saliency of the abortion issue, and the Democrats' shameless efforts to buy off younger voters with a "student loan forgiveness" plan that was always unconstitutional, irrresponsible, and disingenuous in the sense that the Dems knew it was unlikely it would ever be implemented, but felt like making the gesture would earn them some political capital anyway.  And it did.  More worringly, we have to consider the possibility -- actually, the strong probability -- that comprehensive leftist efforts to brainwash the young, in schools, in the popular culture, and beyond, are working.  At many colleges, the loudest voices for censorship, and the most extreme advocates of wokeness, are the students, not the professors or the administrators.  Many of these young people are not just left-leaning -- they're Marxist firebrands!  Even young people who seem politically apathetic are often guided by a worldview that reeks of progressivism, with undertones of entitlement, socialism, systemic racism/sexism, adulation of "alternative lifestyles", eco-madness, and other blights.  Moreover, we have to ask ourselves: why wouldn't young people be overwlemingly progressive?  I mean, what have conservatives done in the last 50 years to try to win over young people, and to prevent the capture of the rising generation by our ideological enemies?  Seems to me that, more often than not, we cede the young to the Left, just like we throw up our hands with racial minorities too.  Spoiler alert: abandoning the next generation to a harrowing leftist fate is no way to save civilization from the perils of neo-Marxism.  We need to wake up and explain to the young why the Dems are in no way, shape, or form their friends.  The Dems are spending the next generation's money on schemes that only benefit rich Democratic Party donors.  The Dems actively discriminate against many young people who don't fall in the "protected categories" that leftists so prize.  The Dems are making young people, and all people, unsafe, by taking the side of criminals and undermining law enforcement.  The Dems are, by their economic and fiscal mismanagement, sentencing many young people to underemployment, unemployment, and hopelessness.  The Dems are even steadily curtailing the rights of young people -- to learn in person and unmasked, to own a gun, to speak their minds on social media, etc.  Seems to me we can make a strong case that the under-30s ought to be drfiting right.  So let's make it!