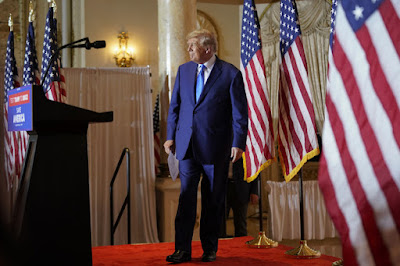 Friends, today was a big, big day in terms of political news.  For one thing, Florida Senator Rick Scott decided to wage an uphill campaign to unseat Mitch McConnell as the Minority Leader in that august body.  I'm hoping Scott will have success, but, whether he does or doesn't, hopefully McConnell will learn a lesson about how he can't take for granted the support of his fellow Republicans.

Meanwhile, House Republicans have chosen Kevin McCarthy as their candidate for Speaker.  That's hardly a surprise, but the even better news for McCarthy is that, according to Newsmax, Republicans have clinched a majority in the House, meaning that his aspirations just got a lot more achievable.  McCarthy won't have an easy time of it with such a razor-thin edge over the Dems, and with a number of his caucus members promising to test his patience with their RINO or MAGA tendencies, respectively.  Still, displacing Nancy Pelosi and the Dem leadership in the House is a very big deal.  It means Republicans are in a position to block many aspects of the Biden agenda -- if they can stand together long enough to do so...

In even bigger news, Donald J. Trump -- heard of him? -- has announced his candidacy for the presidency, filing to run in 2024, as was almost universally anticipated.  Trump still leads in almost every poll of Republican preferences, but those leads seem to be shrinking, as Governor Ron DeSantis's star rises in the wake of his massive win over Charlie Crist last Tuesday.  The media is positively salivating at this golden opportunity to humiliate and defeat Trump...once more, but they and we would be foolish to underestimate him.  So, Trump is running.  Will DeSantis?  Will other Republicans?  Stay tuned!