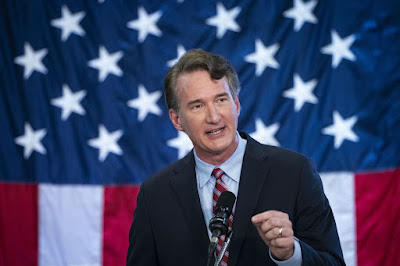 Friends, as you know, Election 2021's marquee matchup is the Governor's race in Virginia.  Glenn Youngkin, the Republican, has taken a narrow lead in recent polls -- and polls tend to lean left, so a small lead could generate a solid win.  That's what we're hoping for...and a sweep of the House of Delegates, the Lieutenant Governorship, and the Attorney General's office as well.  Fingers crossed!  The chances of repeating such a performance in New Jersey look slim, but you never know.  As you'll see here, Biden's waning popularity is lifting all Republicans, by default, so there's hope!

In other news, Dems and progressives are bummed that Terry McAuliffe in Virginia hasn't managed to make the Governor's race there all about Trump.  They assume, naturally, that most people hate Trump, so if voters connect Republicans with Trump, the GOP is doomed.  Well...if that's true, then why did they have to game the system so much in 2020 just to squeak out a narrow win?  Their assumption that Trump's role in the 2022 election could prove damaging to Republicans isn't totally out in left field, however.  No one knows how the "Trump Factor" will play out...

This article lays out the steadily accumulating evidence that COVID came from the Red Chinese lab of death in Wuhan.  But no one cares about that.  COVID?  Never heard of it.

Senator Joe Manchin (D - West Virginia) is still giving his fellow Democrats grief, and one is even calling him a racist and a sexist!  Get used to it, Joe.  Your lot doesn't tolerate original thought.  Want to be respected for your point of view?  Join a "big tent" party like the GOP.  Most of your fellow West Virginians already have.  They're on to something!

The climate confab in Glasgow is going SUPER, as I'm sure you've heard.  One problem: world leaders and expert climate nags are generating a lot of hot air, not to mention carbon emissions via their private jets.  Do as we say, though, not as we do -- that's the motto of the global elite.

Great news!  Senator Rick Santorum is joining the Newsmax team.  You might recall that he was unceremoniously let go by CNN for having the temerity to speak the truth about Native American influence on American culture: it's minimal.  Native Americans, of course, complain about the marginalization of their people all the time, which is to say they make exactly the same claim that Santorum did, but they use more elegant, PC language, and that makes all the difference.  Anyway, Santorum should be a lot happier working for an organization that doesn't believe in canceling everything that moves.

The Washington Post is writing in glowing terms about the positive role played by teenage transgender witches in modern leftism.  Isn't that nice?  All you weirdos going to church on Sundays should take note!

Finally, score another one for the great state of Florida: Rumble is moving its U.S. headquarters to Sarasota, a lovely city, by the way.  The great migration, from blue tyranny and impoverishment to red freedom and prosperity, continues.  Long may it last!

Posted by Nicholas Waddy at 4:36 PM