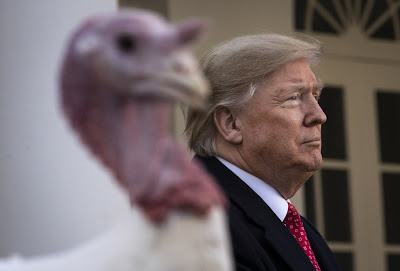 Friends, my latest article isn't about Trump so much as it's about you, the beleagured American conservative, and why, even in this, our season of discontent, we right-wingers should be thankful for what America is, and how well our country has weathered the storm of socialism and wokeness.  It's a bit of good cheer that I hope will inspire you and yours this holiday season.  You can read it soon at World Net Daily.  You can read it right now here:

During this season of thankfulness, it can be all too easy for conservatives to sink into an attitude of lethargy, compounded by despair. After all, since March 2020 we've seen government spending and the power of bureaucrats explode as never before – in reaction, allegedly, to the coronavirus pandemic.

Worse, just one year ago, we suffered a humiliating triple defeat in the 2020 election, with the dastardly Dems capturing the White House, the Senate, and the House of Representatives. Conservatives differ on whether, or how much, this election was “free and fair”, but almost regardless of the answer our loss was still a tragedy of gargantuan proportions.

The fact is, however, that we “deplorables” have much to be thankful for.

Just with regard to the 2020 election and its ramifications, we can count our lucky stars that President Trump motivated 12 million extra Americans to vote for him and for GOP candidates (compared to the 62 million who supported Trump in 2016), because that surge of enthusiasm on the right kept the Democratic majorities in the Senate and the House paper-thin. That has made it well nigh impossible for Nancy Pelosi and Chuck Schumer to push through “transformative” legislation, and it has given the few “moderates” left in the Democratic Party substantial leverage over the Biden agenda, such as it is.

In short, the damage that a Dem-led Congress has done could have been far worse. There is even a very good chance, increasing by the day, that the dreaded reconciliation bill, rebranded as a “social spending” measure or as the “Build Back Better Bill”, will die an ignominious death at the hands of Joe Manchin.

We can also be thankful, in a perverse way, that Joe Biden was elected President, or “President”, as some skeptics might prefer it. Biden is inarticulate, out-of-touch, and profoundly uninspiring and disappointing – and that's according to Democrats! Biden was always a poor representative of the fire-breathing, hyper-woke modern Left. He's also proving to be even less competent and politically astute than Democrats feared, and Republicans expected. His poll numbers have tumbled with historic rapidity, and in time to drag Terry McAuliffe, among others, down to defeat in 2021, serving notice to the whole Democratic Party that it faces electoral armageddon in 2022.

Let's be honest: a different Democratic President – a more persuasive, appealing leader, and perhaps a more subtle one – would have posed a far greater danger to Republicans, to conservatives, to Trumpers, and, most importantly, to the country. Biden has proven such a disaster, in fact, that no leftist/mainstream media attempt to change the overarching narrative (“Insurrection!”) has had any appreciable effect.

Despite all this, Jen Psaki tells us that Sleepy Joe “intends” to run for reelection in 2024. Now that is the best news I've heard in years! Trump will be elated.

Finally, we on the right can and should be thankful that, although the Biden Administration is smashing, like a wrecking ball, into the superstructure of America, the fact is that our nation's foundation remains intact.

Americans are stubbornly adhering to their traditional “family values” this holiday season, gathering with relatives to celebrate God's grace, America's bounty, and their love for one another. Every Thanksgiving meal, in fact, is a rebuke to those leftist nags who say we ought to be masked, alone, and watching CNN this year, instead of sitting around the dining room table and sharing a meal with loved ones.

And, somewhat miraculously, given the abuse it takes from parasitical socialists and arrogant bureaucrats, our capitalist economy has proven to be extraordinarily resilient. Try as they might to deaden Americans' work ethics and entrepreneurial zeal with the entitlement mentality and by endlessly playing the victim card, Democrats have not yet driven a stake through the heart of the free market system. Inflation will wound the U.S. economy, and the living standards of ordinary Americans, but there is every reason to believe that, when the storm of socialism passes, Americans are ready to get back to work, to innovate, to invest, and to embrace a governing philosophy based on the idea that a great country should, first and foremost, live within its means.

The immediate future may not be bright, therefore. In fact, significant pain and sacrifice lies ahead, as Democratic mismanagement compounds the various crises we already face. Nonetheless, we can tell by the crestfallen faces on the Left that the radical transformation of America, and the evisceration of our values, that they hoped to achieve will not come to pass.

Was it our wisdom and perseverance on the right, or the Dems' sheer imbecility and bull-headedness, that worked this miracle, this narrow escape from the jaws of neo-Marxism?

Who knows. Either way, America is back.

And here it is at WND:

In other news, it's looking increasingly likely that the murder suspect in Waukesha, Wisconsin was motivated, in part, by animus towards white people.  We all know, of course, that the media would happily jump to conclusions about an alleged murderer's horrific racism, if the murderer was white and the victims were black.  Alas, the reality of anti-white racism barely registers with the mainstream media.  Given how critical race theory teaches millions of Americans that whites are inherently racist, and America is inherently evil, however, it would hardly be surprising if anti-white bias were surging.  Do "white lives matter"?  To the relatives of the victims, no doubt they do.  To the press and to our political elite, though, the victimization of whites by black offenders only produces discomfort and denial.  Expect, therefore, that the Waukesha incident will be quickly forgotten, and Darrell Brooks will be written off as a lone kook.