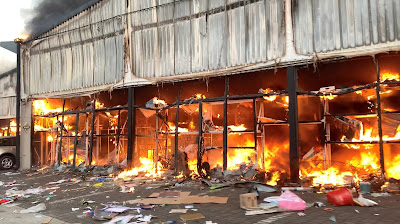 Friends, when South Africa held its first all-race elections in 1994, the world breathed a sigh of relief, assuming that racial strife had been avoided and a bright, democratic, tolerant future lay ahead.  Well, those high hopes have come crashing down to earth in recent years.  Increasingly, the ruling African National Congress uses cynical appeals to the racial loyalties of blacks to cover for its own abysmal failures in terms of service delivery and its appalling corruption.  As this article makes plain, very little works nowadays in South Africa.  What this means, in practice, is that middle class families have to rely on private enterprise to provide almost all the services that ordinarily a government would administer: roads, schools, police protection, you name it.  That's what happens when merit ceases to be a consideration in the appointment of public officials...and when people feel entitled, based on their ethnic origins, to be hired and promoted.  Meanwhile, a depressingly large percentage of the South African population no longer works for wages, but it stridently demands free higher education, free health care, and the extirpation of all cultural traces of the country's former white rulers.  It's an ugly scene, all in all.  It's a picture of a country that, for all its racism and injustice, used to function well, administratively, economically, educationally, and otherwise.  If there's one thing we've learned about leftist, "anti-racist" rule, though, it's that it regularly produces grave dysfunction in governance, crime, disorder, animosity, corruption, and despair.  If we're not careful, the same cycle can and will be repeated here.  In a number of our biggest, bluest cities, it already has.

Speaking of driving America into the ground, the Dems, with a little help from some RINOs, passed their precious infrastructure bill.  That's another $1 trillion down the drain.  Now, the progressives in the House have been saying for ages that they wouldn't vote for the infrastructure bill until the even pricier reconciliation/social spending bill had also passed.  Well, it hasn't, but they did anyway.  Even if the reconciliation bill someday passes the House, moreover, its fate in the Senate is anything but assured.  Seems like the progressives backed down, therefore.  Maybe this signals that they feel responsible for the Dems' poor performance in the 2021 elections?  Maybe they think they owe Sleepy Joe a "win", even if it's a hollow one?  Hard to say, but things are percolating on Capitol Hill.  Let's hope that Manchin and Sinema keep fighting to make the reconciliation bill as toothless as humanly possible -- or, even better, that they and the Dems manage to screw it up altogether and the blasted bill is never heard from again.

Biden's numbers continue to get worse, and Biden's loss is, potentially at least, Trump's gain.

The pandemic is, at least for now, once again in retreat, and new and better treatments hold out hope that the disease can be wrestled into submission, at long last.  The Dems better hope so!  In the meantime, however, Aaron Rogers, the Green Bay Packers quarterback, has become the latest villainous "anti-vaxxer" to attract the ire of COVID enthusiasts.  I, for one, wish Rogers all the best, except on the football field, where I'd just as soon he lost big.