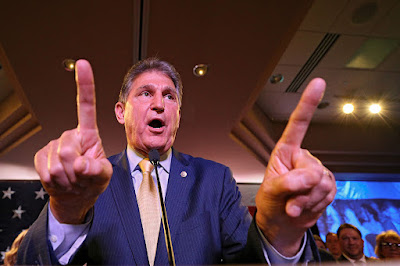 Friends, the only name that's on everyone's lips as often as Glenn Youngkin's these days is...Joe Manchin's.  He's the man of the hour.  Almost singlehandedly he's holding up the Dems' cherished spending spree, and sending his fellow Democrats into fits of mutual recrimination.  It's delightful to watch.  Good ole Joe is in the news again.  First, as a victim of more harassment from far leftists, in this case "climate" activists.  Ready to admit the truth, Joe?  The Left HATES YOU!  It's time to jump ship.  In the second story, you'll see Manchin laying down some harsh truths about fiscal overreach.  As he points out, in the blink of an eye we've spent more allegedly battling COVID than we did fighting Nazi Germany and Imperial Japan.  And now the Dems want to up the ante?  Come on, man!  Lastly, you'll see Joe standing up to CNN and pointing out that this just isn't a left-wing country.  If anything, in fact, he says it leans to the right.  That's not an easy thing to measure, but Joe is certainly correct that Americans didn't elect Joe Biden and a Democratic House and Senate because they love socialism and wokeness.  They did it because they were persuaded that Trump=Beelzebub.  They expected the Dems to restore a sense of normalcy.  How's that turning out?

In other news, recent developments suggest that John Durham is intensifying his efforts to get to the bottom of the Trump-Russia hoax, and it's looking more and more like a Dem con job.  No surprise there, but the question is whether any big fish will be caught in the net...

Here's an interesting analysis of the 2021 elections by a lefty.  He essentially says that the Dems underperformed because their base wasn't "angry" enough.  He has a point.  Trump-hatred was the rocket fuel that powered the ascent of Democrats from 2017 to 2020.  Now that fuel source has been mostly cut off.  They're trying to tap into a new reservoir of anger by harping on white supremacy (that again?), January 6th, and COVID fears, but it remains to be seen if any of those dogs will hunt.

How screwed are we at the border?  Pretty darn screwed!  The numbers of border-hoppers being released into the interior of the country rise ever higher.  This article gives you some perspective on the crisis, which the media is still trying to ignore.

File this one under "Yay for Florida!".  For the first time EVER in the state's history, Republicans now outnumber Democrats.  Remember, Florida was a Southern state, so until the 1960s Republicans were virtually unknown there.  Then, desegregation, the Vietnam War, and the rise of social liberalism gave Floridians a swift kick in the political posterior, which in turn made many of them into Republicans, or at least Blue Dog Dems.  Slowly but surely, the state's shift to the right is coming to fruition.  Long may it last!  The participation of Hispanic immigrants in this phenomenon is especially heartening.

Finally, U.S. trade deficits are setting new records.  Seems like they do that almost every month!  You ought to be a little anxious about this, because our high standard of living in America is undergirded by the fact that foreign countries, like China, are willing to send us all kinds of goodies in exchange for nothing more than little pieces of paper with George Washington's portrait on them.  Decent of them, no?  The whole arrangement relies, however, on the world's perception that the U.S. dollar is worth what we say it is.  And that perception, in turn, relies on the "good faith and credit" of the U.S. Treasury, which means, among other things, it relies on our ability to live within our means.  As our profligacy explodes, therefore, expect the integrity of the dollar, and its exchange value, to falter.  In other words, enjoy those flatscreen TVs and iPhones while you can, because they might not be affordable forever.

Posted by Nicholas Waddy at 4:10 PM