Boris Back on Top? 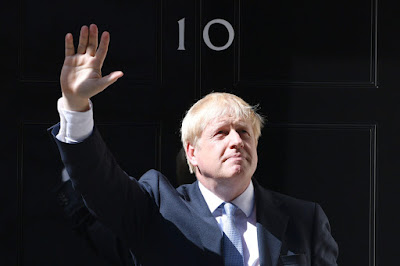 Friends, Boris Johnson's Conservative government has struck a new deal with the EU.  If Parliament approves it on Saturday, then Britain could be in the position of leaving the EU on time on October 31st with a deal that will cushion the blow of Brexit.  Since Johnson's opponents have said all along that he couldn't strike a new deal, and didn't even want to, needless to say he has put them on the defensive.  Moreover, since most MPs claim to want to avoid a no-deal outcome at all costs, how can they justify voting "no" on Boris's new and improved deal?  The answer is that most of them hate Boris so much that they'll vote "no" automatically, and quite a few probably think the alternative to this new deal is yet another extension, so what's the rush?  The outcome is far from assured.  Nigel Farage is urging MPs to vote "no", because he believes a no-deal Brexit is still in the cards and would be preferable.  He may yet get his way.  If Parliament won't play ball with Boris, then Boris can legitimately say to the EU, "I may be legally required to ask you for an extension, but you would be crazy to grant it.  It's time to put this nightmare to bed and accept that a no-deal Brexit is the best we can do."  All he would need is one EU state to agree, and that's all she wrote...  In that sense, whatever Parliament does on Saturday, Boris Johnson -- and the British people -- may come out ahead.