The Johnson-Trump Axis of Victory? 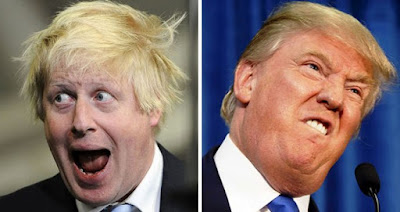 Friends, my latest article considers the implications of the coming U.K. general election...for the U.S. presidential election in 2020. Specifically, I argue that Republicans and conservatives can learn from the resiliency and political resourcefulness of Britain's Tories.  Could Boris have found the key to banishing leftist loons from the halls of power for good?  See what you think of my analysis, coming soon to Townhall.

Springtime for Boris...and Its Lessons for Trump

After much procrastination and evasion, this week Britain's Parliament finally relented to the request of Prime Minister Boris Johnson for a general election. For the first time since 1923, Britain will have an election in chilly December. And yet, for Boris, this would appear to be springtime for his political prospects. Why? His Conservative Party is heavily favored to capture a solid majority, confirming Johnson's premiership and almost inevitably approving his renegotiated deal with the EU over Brexit. In short, by the end of 2019, it would appear highly likely that Boris will have solidified his grip on his party, on Parliament, and on a newly independent United Kingdom. That sounds a lot like total victory, from Boris's perspective.

Why am I so sanguine about Boris's chances? Because for months the British political establishment and the media have heaped contempt on poor Boris. They have pilloried him, whittled away at his majority in Parliament by encouraging defections and rebellion, and questioned his decency, integrity, and even his sanity. Boris has been given the Trump treatment, in other words, and yet he's still standing — unbowed, undaunted, and ready for more. Boris has proven his mettle in extraordinary fashion, and that makes it likely that he can endure — nay, prosper — in the midst of a tough general election campaign. After all, he's used to incoming fire.

Even more tellingly, despite all the slings and arrows that have come Boris's way, his party is soaring in the polls. The latest snapshots of voter sentiment in anticipation of the upcoming general election put the Conservatives ahead by 16, 13, 17, 14, 8, and 15 points, respectively. Can circumstances change before December 12th? Absolutely. But what fresh assault on Boris and the Tories can be contrived, when the opposition has already thrown everything at them but the kitchen sink? Stay tuned on that front.

Given the bright prospects now contemplated by Boris Johnson and the Conservatives in the U.K., it seems reasonable to ask the obvious question: why is the political right thriving in Britain at the same time that a similarly conservative, populist, nationalist leader in the U.S. is struggling? Why is Boris almost certain to win re-election, while most polls in this country show Trump losing to electoral lightweights like Joe Biden, Elizabeth Warren, and Bernie Sanders?

The answer lies in a key difference between U.S. and British politics. In the United States, the two-party system, while manifestly unpopular, has proved surprisingly durable. In the U.K., on the other hand, eight parties captured seats in the last Parliamentary election, and this time approximately ten parties have a legitimate shot at doing so. Moreover, as recently as 2015 the two main British parties captured only two-thirds of the vote. In 2019, the average of current polling shows the Conservatives capturing about 36% of the vote and Labour about 25%. In other words, 40% of the public is either undecided or plans to vote for another party. In the U.S., polling averages show less than 10% of the electorate uncommitted to either of the two main parties.

And therein lies the secret of Boris Johnson's success. Make no mistake: the constant media onslaught on Boris has had an effect. According to YouGov, 48% of Britons view him negatively, and only 34% view him positively. In a political system in which a party that can gain 35-45% of the vote is likely to be a clear winner, however, Johnson's unpopularity scarcely matters. All he needs is for the anti-Boris vote to be scattered between the various parties opposing him, meaning primarily Labour, the Liberal-Democrats, the Scottish Nationalists, and the Greens. Since it would appear that the Conservatives' challengers to the right — Nigel Farage's Brexit Party — are considering an electoral strategy designed to help Johnson secure a majority, his chances of victory rise even further.

The lesson for Trump is a straightforward one, but one not easily acted upon. Trump is, to be frank, an unpopular figure, and an unpopular President, in a country where it is hard to win an election if you gain less than 50% of the votes. That's bad news.

To win re-election, therefore, Trump must do one of three things: he must improve his own popularity (very difficult, given the media's undisguised loathing), he must drive up his opponent's negatives (somewhat more achievable, given the poor quality of the Democratic field and the vast resources available to the GOP), or he must divide and fragment the opposition, making it possible to win in 2020 with less than 50% of the vote.

The last possibility is seldom discussed in American politics, given our strong proclivities for a two-party system, but in fact previous Republican candidates have had success with this stratagem, even if it was seldom a conscious one. George W. Bush famously won in 2000 with less than 50% of the vote, partly because many left-leaning voters supported the Green Party candidate Ralph Nader. Donald Trump himself won in 2016 with only 46% of the vote, in part because many Americans supported the Libertarian or Green Party candidates. Moreover, as we have seen, because support for the two main parties in the U.S. is so even in most election cycles, even a small degree of support for a third party candidate can have decisive consequences.

Keeping all this in mind, President Trump, his advisors, and his supporters might want to pursue the strategy of fragmenting the opposition as much as possible. They could seek to exacerbate internal divisions in the Democratic Party by adding fuel to the fire of incidents like the Hillary Clinton-Tulsi Gabbard feud. They might focus their opposition research on potential opportunities to foster dissension between progressives and centrist Democrats. They might encourage speculation about third party or independent bids for the presidency, like that of Howard Schultz, the former CEO of Starbucks. If all else fails, Republican and conservative donors might even consider contributing to campaigns like that of the 2020 Green Party candidate for President (yet to be determined). Whether that candidate receives half a percent of the national vote, or one percent, or two percent, could easily determine the outcome of the 2020 election. For a conservative, wouldn't that justify cutting a check to an eco-radical? It surely might.

Boris Johnson already understands the desirability, even the necessity, of keeping his opponents divided and off-balance. By doing so, he can thrive in the context of U.K. politics.

Someday, Republicans and conservatives in this country may reach the same conclusion.

P.S. Good news on the impeachment front: the battleground states are leaning against it.  Democrats are, as we all know, playing with fire!