Liberals, Which Is It? Do You Love Communist China or Mother Earth More? 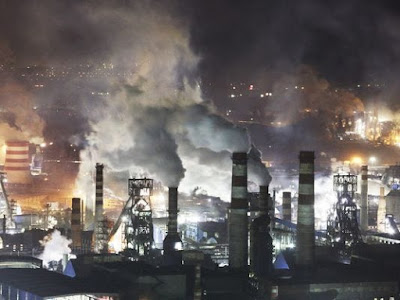 Friends, my latest article focuses on Chinese and liberal hypocrisy. Red China likes to claim that it is at the forefront of both technological innovation and every progressive cause.  The truth is very different.  In terms of protecting the environment, which is both a technological challenge AND a moral/political quandary, China is all bark and no bite.  China pollutes on a gargantuan scale -- and Western environmentalists barely notice.  Meanwhile, "woke" American and European liberals can't say enough complimentary things about China and its wonders.  They give the Chinese, and the whole developing world, a pass when it comes to labor protections, human rights, AND the environment.  I say: no more!  The article you're about to read focuses on Elon Musk as a prominent example of this eco-hypocrisy, but there are countless members of our political, economic, and cultural elite who are guilty of the same sins.  But we at WaddyIsRight are keeping score!

By the way, this article will soon be appearing at WND: WorldNetDaily.  That's an exciting new venue for the propagation of Waddyism!


When Will Liberals Wake Up to China's Environmental Hypocrisy?

Recently, in the context of a conversation about green energy, Silicon Valley icon and noted environmental nag Elon Musk observed that China “is the future.” Either Musk is spectacularly naive, or he is purposely misleading his investors and the public (and not for the first time?). If anything, China is the future of pollution and poor global citizenship, not green energy.

True, the Chinese government is positioning itself, and scores of Chinese companies, to profit handsomely from rising global investments in green energy, including solar and wind power. It is also prioritizing the electric car market. Musk himself is planning to build more and more of his electric cars in China — no doubt tempted by China's low wages, lack of unions and labor protections, and loosey-goosey environmental standards. China, in other words, is brimming with profit potential, even if a serious commitment to conservation is lacking.

And that, as it turns out, is an understatement! As corporate America and the mainstream media fawn over China's green energy virtuosity, the truth about China and the environment is enough to turn anyone's stomach...literally, if you take a deep breath of Beijing's smog, or drink some of its toxic water.

But it’s more than that. For the PRC (People's Republic of China), environmentalism is merely a front. Political and economic power is China’s endgame, not green energy. That’s what makes Musk’s latest declaration all the more dangerous. In his quest for Chinese profits, Musk is legitimizing a regime that wants nothing more than to expand its influence across the globe. Musk’s decision to embrace the PRC is even more troubling in the light of his environmentalist rhetoric, coupled with China's record of complete indifference to environmental protection.

Consider the facts. China is the leading emitter of carbon in the world, and it isn't even close! China overtook the United States way back in 2006. Since then, U.S. emissions have declined, thanks in part to the rise of natural gas, while Chinese emissions have risen steadily. Why? China's economy is growing fast. That's one explanation. The other is that the Chinese are building dirty coal-fired electrical plants, and putting highly-polluting cars on the road, at a record pace. Although the Chinese brag about building solar panels, they actually use remarkably few of them. Those panels are for export to affluent tree-huggers in the developed world. Meanwhile, the Chinese economy is flying high on its carbon “fix.”

Everyone has now heard of the veritable archipelagos of plastic forming in the Pacific. One “garbage patch” is reportedly twice the size of Texas. Eco-fascists wag their fingers at Americans for daring to use plastic straws, but the reality of marine pollution is that China is responsible for a much greater percentage of it than the United States. China is leading the charge when it comes to despoiling our seas, while the rest of the world buys its shoddy products and pumps billions of dollars into its relentless expansion. Do environmental activists care? Seemingly not, to their everlasting shame.

The hypocrisy of the U.S. political, economic, and cultural establishment — in blaming President Trump for a “climate crisis,” while at the same time holding China blameless for its rampant defilement of Mother Earth — is breathtaking. Musk, who goes hat in hand to beg for the PRC's tax credits even as he boycotts President Trump's advisory councils, is a prominent example of this hypocrisy. Just recently, in fact, Musk had the audacity to announce the launch of a new Tesla construction division in China. There, he will supply jobs and investment to the nation with the single worst environmental record on Earth, all while railing against President Trump’s climate policies in the United States.

Keep in mind, Musk and his companies receive millions of dollars each year in the form of federal grants, contracts, and subsidies. Even as he courts America’s foremost political and economic adversary with promises of factories in China, Musk works as one of the principal contractors for the U.S. government. In effect, American taxpayers are funding Musk’s escapades — and, when he gallivants off to China, handing out new factories like they were candy, the taxpayers are funding that as well. The question is: why?

Americans should hold Musk and his companies accountable. They should insist that Musk, and his fellow liberals, stop taking the side of the PRC's communist overlords, and stop doing business with the country most responsible for damaging the environment.

Unfortunately, at the moment, carbon emissions, marine pollution, and many other environmental problems are only getting worse, because the people who claim to be battling them are, in fact, in bed with the worst polluters of all.

And here it is on WND: https://www.wnd.com/2019/10/chinas-musks-environmental-hypocrisy/

And, in other news, our illustrious Vice-President is touring the nation, visiting swing districts to drum up support for a Republican House takeover in 2020.  This is music to my ears.  We need a Trump win in 2020, sure, but it is very achievable to retake the House as well -- and this would drive the Left bonkers!!!  Isn't that our number one goal?  I'd say so!
https://www.nbcnews.com/politics/congress/pence-taking-impeachment-fight-vulnerable-democratic-districts-n1064596
Posted by Nicholas Waddy at 2:11 PM