Holy Schiff! Is This How Democracy Ends? 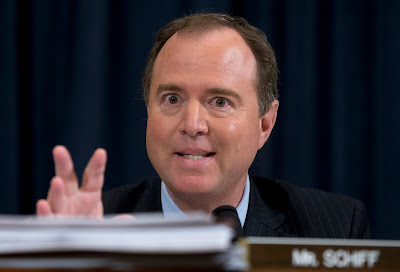 Friends, this week's Newsmaker Show with me and Brian O'Neil covers a lot of ground.  We consider the prospects for impeachment under Chief Inquisitor Adam Schiff.  We also ponder how many Americans will be fooled by the latest "witch hunt" against President Trump, and whether it has a potential upside for Republicans and conservatives.  In addition, we ask whether Presidential conversations with foreign leaders ought to be kept secret.  Historically, Brian and I talk about the anniversary of the creation of the People's Republic of China in 1949, the fate of the Warsaw Uprising in 1944, the choice of Thurgood Marshall to be the first black Supreme Court Justice in 1967 and the role of the court in American politics, and Operation Typhoon: Germany's go-for-broke attack on Moscow in Fall 1941.  It's a little of everything this week -- don't miss out!

Consider also this very interesting impeachment analysis.  The Dems are already wavering!  The appearance of party unity is just that -- for appearances' sake only.

https://www.realclearpolitics.com/articles/2019/10/02/pelosis_sidestep_on_impeachment_vote_cuts_both_ways__141391.html
Posted by Nicholas Waddy at 9:52 AM