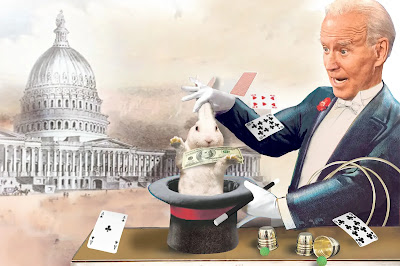 Not much in the news these days, friends -- we're just careening towards nuclear armageddon, as per usual.  Speaking of which, the American people remain highly supportive of U.S. humanitarian and military aid to Ukraine, but also highly skeptical of any proposal to inject U.S. military forces into the conflict.  And that, I humbly suggest, could play out very interestingly and problematically should Russia decide to escalate by using nuclear weapons against Ukraine.  The Beltway elite is already talking in cavalier terms about responding "in kind".  Would the American people countenance that?  Only one way to find out...

And here's an intriguing analysis of the Dem strategy for 2022.  It's not rocket science, really: the Dems believe they haven't a leg to stand on, so instead they plan on kneecapping the competition, i.e. us.   In other words, they'd like to make 2022 and 2024 into referenda on Trump, because they feel that's their best hope of winning.  The sad part is...they're probably right.  The American people are sick and tired of Biden and his Congressional cronies, but they might be even more averse to DJT.  Now, I don't think this approach will avail the Dems much in 2022, when Trump won't be on the ballot, but all bets are off in 2024.  With Trump-hatred and popular resentment of a "do-nothing" Republican Congress in his pocket, even Sleepy Joe might squeak by and win re-election.  Stranger things have happened.

Posted by Nicholas Waddy at 4:25 PM