The Elephant in Harvard Yard 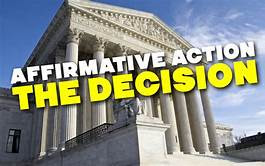 Friends, today I recommend to you this excellent article about the state of affirmative action in higher education.  Very soon the Supreme Court might consider this issue anew, and I sincerely hope they will end affirmative action for good.  You don't hear much about racial preferences in the media -- because to draw attention to them or to question them is not politically correct -- but, as this article describes, the extent of their use, both in higher ed and in the business world, is vast...and very troubling.  Millions of Americans are being negatively impacted by these preferences: whites and Asians who are denied opportunities based on their race, and blacks and Hispanics, who are, in many cases, given these opportunities, but do not have the background to be successful in their new roles.  The alternative -- to judge people based "on the content of their character" and on their abilities, rather on than their skin color or ethnic background -- seems not to occur to many leftists, but it's one that conservatives, and most Americans, support.  Let's end affirmative action for good, therefore, and let's call race preferences what they are: a form of racism that has no place in 21st-century America.

And a quick reminder: media bias has been with us for a long time, and the dearly departed President George H.W. Bush was a frequent victim of it.  Take all the after-the-fact praise of his legacy that you see in the press with a grain of salt, therefore.