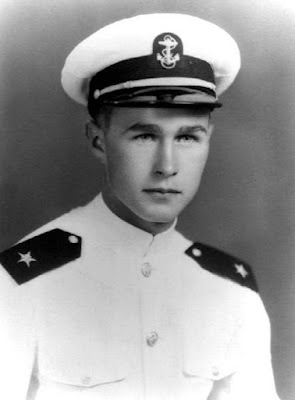 Allow me to join in that great chorus of voices that is praising the honorable service and accomplished life of former President George H.W. Bush, who died yesterday.  I was always a big fan of his.  For many years, in fact, there was a life-sized cardboard cutout of President Bush that adorned my room.  Granted, Bush was a moderate, and in 1992 I was sorely tempted to support the insurgent candidacy of Pat Buchanan (for all the obvious reasons), but I never lost respect for Bush the man.  He was a patriot, a gentleman, and a consummate public servant.  It is to the everlasting shame of this country, if you ask me, that we replaced Bush with...Bill Clinton, of all people, in 1992.  We traded a war hero for a peacenik draft-dodger.  What a deal!  That's water under the bridge, though, and Bush himself never bore a grudge.  Can you imagine an officeholder graciously accepting defeat, in our present climate?  Well, times have changed, and not always for the better.  Mark my words: you'll see a lot of news stories in the next few days to the effect that the real lesson of Bush's life is...that Trump sucks.  I respectfully disagree, although I understand why the Bushes find Trump's style so odious.  They're entitled to their opinion.  I'm also entitled to mine: I think George H.W. Bush was a fine man and an excellent President.  By all appearances, he was a great family man too.  He will be missed.
Posted by Nicholas Waddy at 3:45 PM