Will the 21st Century be the Anti-American Century? 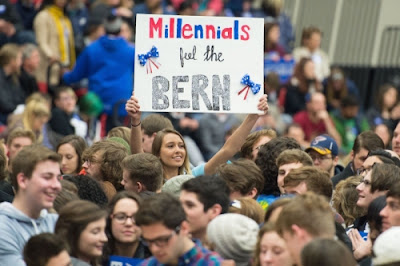 Friends, the fact that so many young people are attracted by the siren song of leftism is a source of profound disappointment for many conservatives, as it should be.  This "poll" professes to measure some of the shockingly liberal and unpatriotic sentiments of the younger generation, and thus, despite its serious methodological flaws, it can serve as a wake-up call for those on the right who believe that "the children are the future," as, of course, in a literal sense they are.  The Left is doing a full court press to convince children and young adults that America is a hellscape of racism, sexism, homophobia, xenophobia, and transphobia, and only the Democrats can save us from the KKK/Republican Party.  Many youngsters are swallowing the bait.  Be afraid!

Secondly, you may wish to read one of Victor Davis Hanson's articles, which are always stimulating.  In this article, Hanson opines that Trump's rashest and most juvenile remarks and tweets are hurting him with the sort of moderate, suburban voters he needs to win re-election in 2020. To a point, I agree.  Trump's style irks many people, and he could smooth out some of the hard edges of that style in order to minimize his offensiveness.  What Hanson doesn't seem to get, though, is how little style or substance matters when the media is determined to make you look bad.  Many of Trump's "outrageous" tweets aren't in fact outrageous at all.  They're just spun that way by a hostile press corps.  Unless Trump gets some handle on the media, and shames or intimidates them into moderating their bias, his stylistic changes won't accomplish much, in my view.

And here's another article that echoes my position that, unless conservatives learn how to reverse the Left's domination of the media and many other culturally pivotal institutions, our collective goose is cooked: