The Lesser of Two Evils 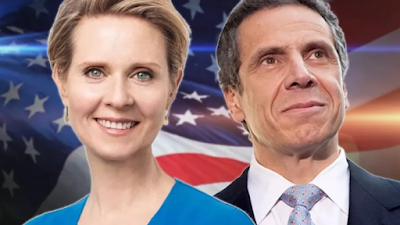 Friends, difficult though I find it to root against any political candidate with the last name "Nixon", I think it's safe to say that Cynthia Nixon would have made a dreadful governor, and thus we can be glad that she was defeated by Andrew Cuomo in yesterday's Democratic primary.  We shouldn't be surprised, though, because Cuomo had a massive lead throughout the contest, and Nixon's brand of uncompromising kookiness, while it may appeal to the white granola crowd, doesn't cut it with typical Democratic primary voters, who tend to be working class people of color and not rarefied limousine liberals.  Nixon, of course, never was running for Governor of New York.  She was running for attention, and to annoy Andrew Cuomo.  She accomplished both objectives.  Well played!  The other big news is that the Super Kook, Zephyr Teachout, did not prevail in the Democratic primary for Attorney General.  Again I say: thank heavens!

For me, the other big takeaway from the election in NY is this: my instincts told me that Nixon would lose, but that she would outperform many of the polls that had her getting the support of 20-25% of voters.  I guessed she would win a third of the vote, and she did just that.  My insights are vindicated!  That's good news, because my instincts also tell me that the polls that indicate that Democrats are leading by ten points or more in the race for control of Congress are pure drivel.  My guess is that that Democrats may narrowly win the national vote for the House of Representatives, but they may still fall short of capturing control, nonetheless.  This has happened before, and recently too, in 2012.  My instincts also tell me that Republicans can and will hold on to most of their gains in state legislatures and governorships, and, most importantly, the Republican majority in the Senate will actually grow.  Mark my words: the "blue wave" will disappoint.  You heard it here first!
Posted by Nicholas Waddy at 2:40 PM