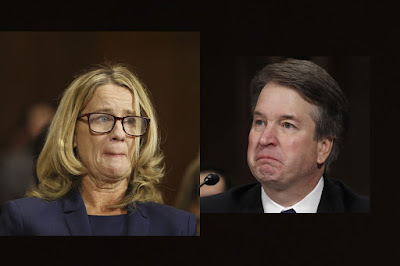 Friends, I recommend to you this great article, which aptly summarizes where we find ourselves after the testimony of Christine Blasey Ford and Brett Kavanaugh before the U.S. Senate.  The nation was entranced by their emotional performances, but, as I opined beforehand, the superficial credibility of a witness pales in comparison to the power of evidence, and there is no evidence on hand that can prove either Judge Kavanaugh's guilt or the falsity of Ford's claims.  This affair is, always has been, and always will be a matter of "he said, she said", and no FBI investigation will change that.  Democratic Senators did their best to undermine Kavanaugh's credibility, and they gushed over Ford's bravery and nobility (never even considering the possibility, so it would seem, that she could be lying or mistaken), but none of that goes to the heart of issue: did he do it, or did he not?  The hearings were, in the end, a dramatic sideshow that will have, in all likelihood, little effect on the confirmation votes of Democratic and Republican Senators, and which never had anything to do with justice and fair play.

Personally, I see the Republicans' decision to concede a further FBI inquiry into Brett Kavanaugh, lasting one week, as good news.  Such a pause will take away one of the Democrats' key talking points -- that Republicans refused to take the allegations seriously -- but it is highly unlikely to produce definitive evidence of what happened in 1982.  The real effect of the FBI investigation will be to give wavering Republican Senators (Collins, Murkowski, and Flake) political cover to vote "yes" on Kavanaugh.  They can say that they went the extra mile and sought an FBI probe, but that it produced no proof of guilt, and plenty of reason to doubt Ford's account.  The end result will therefore be as I predicted weeks ago: Brett Kavanaugh will be our next Supreme Court Justice.

The Dems tried their best, and they showed just how devious and resourceful they can be in the pursuit of power, but once again they will come up short.  Let's hope that their losing streak remains unbroken in November, and far beyond.