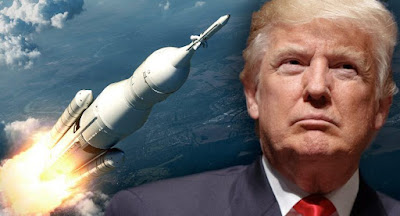 Friends, we get so entranced by the news of the day that we forget about the big picture sometimes.  I've long believed it was mankind's destiny to transcend the limits of this charming little planet and venture out among the stars.  As of the late 1960s, it probably seemed that we were hurdling towards that destiny at a breakneck pace.  No more.  Our zeal for space exploration abated in the 1970s, to be revived slightly by the space shuttle program in the 80s, but since then our momentum in space has been lost.  My latest article is a call to arms to the American people to support President Trump's ambitious agenda in space.  Fortunately, although progress has been slower than any space enthusiast would like, we will soon have a Space Launch System (SLS) that can propel us heavenward.  Personally, I can't wait, and I hope we'll devote the necessary resources to NASA to achieve interplanetary greatness ASAP!

Read all about it in Townhall: