The Unbearable Trumpness of Being 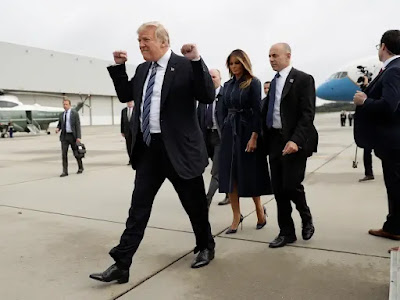 Friends, another day, another big win for Trump -- in a poll of conservatives' preferred choice for the GOP presidential nomination in 2024.  Big yawn, you say?  Fair enough, but the remarkable durability of Trump's appeal, flying in the face of ceaseless, practically manic efforts by the establishment to blacken his name, is remarkable, to say the least.  What's more, an election loss is usually more than enough to cause disenchantment to take hold among a former president's supporters.  Not for Trump.  His likeability and favorability, as far as Republicans and Americans in general is concerned, is more or less unchanged from 2020.  In fact, it's slightly higher -- the January 6th committee be damned!  Trump has been defying gravity since 2015.  Can he do so once more in 2024?  Don't count him out.

Nikki Haley recently made an offhand comment that "If we don't win in 2022, there won't be a 2024".  She doesn't seem to have explained what she meant, but it's a concept that we on the right should take seriously.  The absolute worst case scenario for the GOP in 2022 is that they will narrowly fail to capture the House and they will lose ground in the Senate.  If that happens -- and it's about a 20% likelihood at this stage -- then the Dems will be in a position to abolish the filibuster, add (blue) states to the Union, federalize our elections, and most importantly pack the Supreme Court with pliant leftists.  I remain optimistic about 2020, but the truth is nevertheless that our country is poised on the edge of an abyss.  We are just one election cycle away from, as the Dems would have it, "abolishing democracy" for all intents and purposes.  We would do well to remember that and thus to exert ourselves mightily to win, win, win in 2022.

Finally, Stacey Abrams, Georgia's pseudo-Governor and honorary President of Earth, talks nonsense all the time, but recently she made the extraodinary claim that abortion should not be restricted based on "arbitrary gestational limits".  Now, a trimester-based calendar of abortion rights is precisely what Roe v. Wade was based on.  What Abrams is saying, although she would never admit it, is that she and the progressive movement have moved way beyond Roe and the Supreme Court of 1973 in their advocacy of abortion rights.  They want late-term abortions, in short, and lots of them.  They also want to be free to trumpet Roe as a pillar of American liberty while at the same time rejecting its fundamental logic in favor of more radical forms of social engineering.  In other words, they want to make contradictory claims simultaneously and they feel entitled never to be called on their non sequiturs.  As long as Abrams keeps appearing on NBC, her wish will probably be granted.

Posted by Nicholas Waddy at 2:53 PM