Reflections on the Frozen North 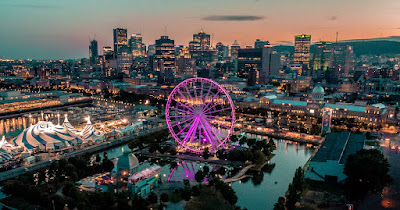 Friends, now that I've returned from my visit to Montreal, I figured I would give you my two cents (that's two Canadian cents) on Canada.

Basically, as a conservative, I have to contend with my fellow right-wingers' ingrained assumptions about the Land of Maple Syrup and Socialized Medicine -- namely, that it is a place where government runs riot, where basic constitutional rights are not respected, and where taxes, mandates, and wokeness dominate daily life.

Now, all this is true, to a point.  Canada really does have socialized medicine -- to a degree that few other countries, even in Europe, can match.  It has higher taxes than the U.S.  It persecutes those who engage in "hate speech" (and dissent?) more vigorously than we do.  It wears its identity politics on its sleeve.  It instituted one of the strictest, most draconian COVID regimes in the Western world.  It prides itself on its openness to immigration, although, thanks to its geographical isolation, the overwhelming majority of that migration occurs through legal channels.  As many of you will know, Prime Minister Justin Trudeau wants to make it virtually impossible for Canadians to own many classes of firearms.  And so, from a conservative perspective, all this looks mighty bleak!

On the other hand, Canada, to the casual observer and to the ordinary tourist, presents itself in a generally favorable light.  The country appears prosperous, the people are happy, healthy, and welcoming, and the land is extremely beautiful and blessed with almost limitless resources.  Much as American conservatives might like to portray Canada as a land of fascistic tyranny, there seems to be little evidence that Canadians themselves feel particularly oppressed, or that they wish to escape their plight in favor of exile in the States.  Canada is a place where most of the items on American progressives' extensive wish list have already been implemented as law and policy...and yet life goes on, and seemingly without any great gnashing of teeth.  The same might be said, arguably, for life in California, or New York, or Hawaii, or the District of Columbia, or any number of other progressive bastions.  This is not to suggest that these areas do not suffer from significant dysfunctions, because they do, but proving, objectively and definitively, that life is worse in leftist regions, or that people are less content, is far from easy.  That's my impression, at least -- if I'm wrong, and any of this blog's faithful followers can prove me so, I'll be happy to admit my error.

In sum, therefore, I conclude based on my brief sojourn in Canada, that life in the frozen north is less tortuous and baleful than we American right-wingers have been led to believe.  Some of this may simply be down to the extraordinary material prosperity of all modern Western societies, in which almost all political and social setbacks can be borne, because, at the end of the day, no one's survival is greatly imperiled -- or at least most people's well-being is more or less secure.  Some of this may also be a factor of the extraordinary stability of Western political institutions and (classically) liberal norms, both of which may be wavering at present, casting into doubt whether U.S., Canadian, and European contentment will last much longer.  But that is speculation about the future.  For the present, life in Canada, and the U.S., ain't so bad.

So, in a word, my message to the people of Canada is a very simple one: Sorry!  That is, I'm sorry to have exaggerated your mania for Marxism ever so slightly, and I am genuinely impressed by the pleasing political, social, and economic order you've built.  Keep up the good work, Canucks!