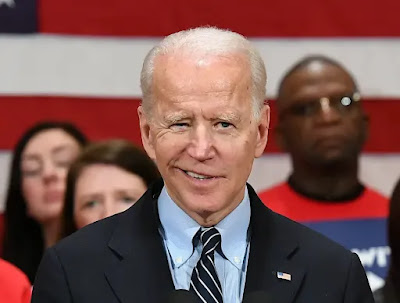 Friends, the avalanche of helpful advice flowing from the Left to Joe Biden keeps growing, most of it calculated to avert a Biden reelection bid.  Dems aren't outright attacking Biden (yet).  They're trying to nudge him gingerly in the direction of retirement...for his own good, so they say.  This article takes the cake.  It purports to argue that no one should ever want a second term as president, because second terms are sooooo lame.  Uh huh.

In other news, check out this Los Angeles Times editorial, suggesting that Donald Trump should be charged with "crimes against the United States".  The article goes on to suggest that Trump is guilty of fraud and "conspiracy to obstruct an official proceeding".  Both charges would amount to utter nonsense -- Trump's only crime was in exercising his free speech rights as a sore loser -- but one can't entirely dismiss the possibility that the DOJ would prosecute, or that a stacked jury might convict.  Then again, the Dems seem to want Trump to run in 2024, because they think he would be easy to defeat.  That would be hard to do from a jail cell, no?

Russia is toggling gas supplies to Europe lower, yet again, and it's hard to imagine that this isn't meant to send a political/economic message.  Will Europe buckle under?  We shall see.  Enthusiasm for the endless fighting in Ukraine is certainly ebbing.

Finally, in another instance of establishment wish fulfillment, just as they imagine that, any day now, DJT will be breaking rocks in a federal prison, they've also persuaded themselves that by 2024 the GOP will have seen the error of its ways and will make Liz Cheney its standard-bearer!  Not likely, folks.  On the other hand, a Cheney run for the presidency in 2024 as the "Never Trump" candidate or as an independent is feasible, and personally I would love to see it.  The more divided the field is, the better Trump's chances of victory.  He probably ain't getting to 50% of the popular vote.  If he can win with 45%, so much the better.

Posted by Nicholas Waddy at 1:52 PM