No Country for Phony "Refugees"? 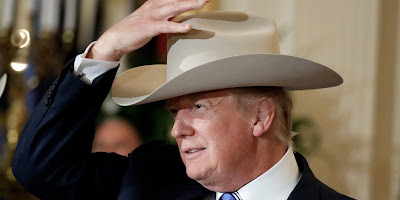 Friends, there's a new sheriff in town, and his name is Trump. The President has decided to shut down the government to force the Democrats' hand -- and hopefully secure funding for a border wall.  Hallelujah!  It's about time.  I wish President Trump well.  In my latest article, I outline some of his bold moves at the border, and I suggest some additional measures that would help to defeat the scourge of illegal immigration.  Enjoy!  (P.S. Special thanks to Jack, whose fondness for Hispanic lingo helped to inspire the title.)


Trump is Proving to be One Tough Hombre at the Border

After some indecision, President Trump has decided to roll the dice and embrace a government shutdown in order to put pressure on Congressional Democrats to fund a “Great Wall” on the border with Mexico. Bravo, President Trump!

Conservatives and patriots have watched with consternation over the past two years, as Trump has repeatedly given way on the issue of wall funding. The time has now come for Republicans to put up or shut up. As Trump observed himself, upholding the sovereignty of our nation, and protecting the safety of the American people, is the first responsibility of any elected official. Thus, adequately fortifying our porous border with Mexico ought to be a no-brainer for any Congressman. Since, unfortunately, quite a few Congressmen lack the necessary brains to realize this, their hands must be forced. So be it. It is high time that an American President showed the mettle to take this battle on.

The media's reaction to a shutdown is predictable: they will spin it as a calamity caused, as per Chuck Schumer's latest trademark sound bite, by a Trumpian “temper tantrum”. Walls are dumb, the press will say, and Trump is wasting everyone's time, since the Democrats will never vote for a wall. The obvious rejoinder is...Trump clearly believes in the necessity of a wall, as do many of his core supporters. We shall see whether a day, or a week, or a month, or a year, of partially disabled government is enough to bring Democrats to the negotiating table, but they will crack, sooner or later. If in the end that means meeting President Trump halfway and voting for slightly less than $5 billion for the wall, that would be vastly better than nothing.

Those who believe in border security should be thrilled that President Trump is finally going to the mat for a wall. The good news doesn't stop there, however. This week the U.S. also agreed with Mexico that, in future, those traveling through Mexico to apply for asylum in the U.S. will stay in Mexico while their claims are being processed. This is a huge win for the Trump administration. What it means is that Mexico will bear the burden of housing and caring for these migrants (no doubt subsidized by the U.S.), but more importantly these opportunistic gate-crashers will be denied, both in the short-term and in the long-term, what they most want: entry into the United States. After all, going forward, how many poor Central Americans will make the trek to the U.S. border if they know that at the end of it they face a long spell in a Mexican detention camp, followed by a likely refusal of their asylum application by U.S. authorities? Very few indeed.
Imagine just for a second, though, that Hillary Clinton had been elected in 2016 instead, and she had welcomed every self-described “refugee” at the border with open arms, continuing President Obama's policy of “catch-and-release”, which gave these mostly phony asylum-seekers immediate gratification: the ability to work and live in the U.S. Trump's new agreement with Mexico constitutes a strong deterrent to illegal immigration and to fraudulent requests for asylum. The Democratic “plan” for the border, though, would have encouraged greater and greater flows of migrants/refugees, and thus by now America's cities would be overflowing.

We can't, of course, rule out the possibility that Mexico will balk, or that some grandstanding federal judge will try to block President Trump's brilliant new deal with Mexico with a national (or international) injunction, but on the face of it Trump has, at a stroke, torpedoed the raison d'être of the “caravan” system. The end of the road for most migrants will now be in Tijuana, instead of Los Angeles. The American people can breathe a huge sigh of relief.

Despite all these positive signs about President Trump's seriousness about defending our border and our sovereignty against the tide of illegal immigration, there is still more to be done. A wall will not, by itself, prevent all illegal crossings, nor will it stop people from coming to the U.S. as tourists or as students and then choosing to stay here. What will put an end to these forms of illegal immigration is strong sanctions on U.S. employers who hire undocumented workers. The Trump administration has so far not moved as aggressively as it should in this regard. Millions of U.S. businesses continue to scoff at our labor and immigration laws. There still exists no better way to disincentivize illegal immigration than by depriving illegal aliens of work opportunities. Despite the carping this will engender from corporate America, it is in the long run the only way that illegal immigration can be defeated.

Secondly, our country has, as I have noted before, strong laws prohibiting the harboring of illegal aliens, and which make it a felony to aid or encourage illegal immigration. Democratic politicians and various “pro-immigrant” advocacy groups are violating these laws with impunity and have been doing so for years. Jeff Sessions' Department of Justice followed standard operating procedure in such cases – that is, it assumed that Democrats and liberals are above the law. There is no reason why the Whitaker or Barr Justice Department should act with similar fecklessness. On the contrary, it is high time that illegal immigration's enablers and apologists should face the music.

With President Trump's help and guidance, the United States is about to turn the corner on the issue of illegal immigration. We are about to control our border with Mexico for the first time in decades.

Let's not stop there, however. Let's control the homeland as well, by making it a place where employers, politicians, and activists alike respect our immigration laws, and where crime does not pay.

And here's the Townhall version: