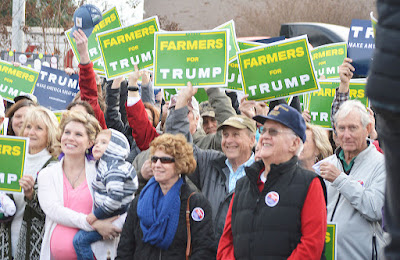 Friends, it annoys me so end that the Left, which so often takes the side of foreigners over Americans, has twisted the issue of "foreign meddling" into one that casts Trump and Republicans as lacking patriotism.  What cheek!  My latest article shows how foreign meddling in elections is a very widespread phenomenon, and the laser-like media and Democratic focus on Russia-related meddling is self-serving and deliberately misleading.  In particular, I draw attention to one way in which China is engaging in egregious election meddling as we speak -- and the media and the Left couldn't care less...  Read all about it:


Worried About “Foreign Meddling”? Then Throw the Book at China!

Every day for the past 18 months, we have had to endure legions of news reporters and liberal lawmakers appearing on our television screens, pretending to deplore “Russian meddling” in America's 2016 presidential election. Never far below the surface of this tedious moralizing is the implication that (evil) Trump wouldn't be President if it weren't for Russia's skulduggery, and, since he surely worked hand in glove with the Russians all along, he ought to be booted from office.

The truth, as many conservatives have pointed out, is that a) Russia's “meddling” was irrelevant to the central dynamics of the 2016 election, which was lost by Hillary Clinton – a truly dreadful candidate – more than it was won by Donald Trump, and b) “foreign meddling” in American elections, and American meddling in foreign elections, is nothing new or particularly outrageous. Indeed, every election is imperfect, and yet, despite these imperfections, those who truly believe in democracy readily acknowledge that, broadly speaking, electoral results still encapsulate the people's will. This is why Richard Nixon, despite his well-founded concerns about election rigging in 1960, never contested John F. Kennedy's victory. He foresaw that this would lead to endless electoral hair-splitting and a field day for lawyers, all of which would damage the country he so loved. He thus swallowed his pride and waited his turn to run again. If only Democrats were as patriotic and far-sighted!

“Foreign meddling”, in any case, comes in many forms, and it is by no means the Russians who are solely, or even primarily, responsible for it. Aggressive “influence campaigns,” of the sort waged by Russia in 2016, were waged by the United States throughout the Cold War, and we still “meddle” from time to time. The Obama administration, for instance, gave money to a group that campaigned against Prime Minister Benjamin Netanyahu in Israel's 2015 election. Moreover, the U.S. actively intervenes in Iraqi and Afghani politics. Influence campaigns are also standard operating procedure for China, Israel, Iran, and various wealthy Persian Gulf oil states.

It's not merely governments that “meddle”. Foreign citizens may be forbidden from donating to U.S. political campaigns directly, but their (paid) lobbyists in this country are not. Foreign lobbyists gave millions to candidates in 2016. (The Russians, by contrast, laid out only $100,000 for their famous Facebook ads.) The top recipient? Hillary Clinton, of course. Senator Chuck Schumer was third. The enormous foreign contributions made to the Clinton Foundation are also a matter of record – some of them made during Hillary Clinton's tenure as Secretary of State – and it is not hard to imagine that these overseas donors may have expected some backscratching in return for their largess.

Corporate donations to political campaigns and Super PACs represent another way for foreigners to “meddle” in U.S. elections. Corporations can give unlimited amounts of money to organizations promoting political causes, rather than specific candidates, and, lest we forget, the stockholders of these corporations are very often foreigners, espousing foreign, or “globalist”, agendas. Evidence is also mounting that wealthy foreigners contribute to Super PACs directly. Safeguards to prevent this are pitifully weak.

Meanwhile, the most potent form of “foreign meddling” in the 2016 election had nothing to do with financial contributions or hacking. It came in the form of repeated statements by foreign leaders that were designed to undercut the Trump campaign and boost Hillary Clinton's chances of victory. British Prime Minister David Cameron labeled Trump's call to restrict Muslim immigration “divisive, stupid, and wrong”. French President Hollande said Trump sometimes made him want to “retch”. China's finance minister called Trump's trade proposals “irrational”. Mexico's president baldly compared Trump to Hitler and Mussolini. Clinton, by contrast, earned international plaudits. The Italian Prime Minister declared he was “rooting” for her.

All of these statements, naturally, were intended to influence public opinion, including the views of American voters, and they represented a departure from historical norms of non-interference. Was this “foreign meddling” roundly condemned by liberals and the news media? Of course not. Prior to Donald Trump's historic victory in 2016, concerns about “foreign meddling” were decidedly muted, because it was assumed that the “right woman for the job” would win.

Now, though, China is presenting us with a new and arguably even more provocative form of election meddling. Given its timing, and given Democrats' incessant hysterical warnings about the existential threat to American democracy posed by foreign interference, you would expect that these pillars of patriotism and rectitude would be screaming bloody murder. But no – as usual, it's only Trump-related and Russia-related “meddling” that merits their attention.

And how is China interfering with our democracy? In the most naked, shameless manner possible. In response to President Trump's tariffs against China, designed to combat Chinese trade manipulation and theft of U.S. intellectual property, China has retaliated with tariffs of its own. Those tariffs, however, have been targeted against states and regions that supported Donald Trump in the 2016 election. Texas and Louisiana top the list of affected states. Rural areas have also been hard hit, with China slapping steep tariffs on soybeans, dairy products, and meat. Rural voters, lest we forget, supported Trump in 2016 by record-setting margins. In other words, China's tariffs are designed to punish Trump's key constituents. In essence, they are designed to blackmail Trump voters into abandoning their support for Trump, and by extension for his economic and trade policies. China's actions are therefore a direct and purposeful form of interference in U.S. elections and in our system of governance.

Are Democrats (and Trump-decrying Republicans) reacting to this assault on American democracy and the integrity of our elections with sanctions, threats, and general outrage? Not a bit of it. They are blaming the whole debacle on President Trump, who had the temerity to challenge China's dishonest trade practices in the first place! In other words, given the choice of siding with American consumers and U.S. workers, or with the foreign countries and interests taking advantage of them, these two-faced politicians are choosing to undercut the President of the United States and give aid and comfort to our trade adversaries! Incredible.

The sad part is that we know that President Trump's hardball trade tactics can work. They did with South Korea, and just recently they produced a deal (in principle) with the E.U. Trump's aggressive pursuit of fair trade works best, however, when Americans project an image of unity. If instead our adversaries believe that Trump will be forced to knuckle under to a fractious Congress or a critical media, they will refuse to budge in trade talks. Trump's domestic enemies know this. They know their carping is undermining America's negotiating position and exacerbating our “trade wars,” and they don't care. They want Trump, and America, to fail.

The Left and the media's utter indifference to China's attempt to manipulate American voters proves, as nothing else could, that their phony outrage over “Russian meddling” is exactly that: empty, opportunistic, and undoubtedly temporary. Our political elites have stood by for years as foreign interests exercised more and more control over American democracy, and as U.S. economic independence was forfeited. They expressed not a whit of concern about these trends before 2016. Now that Donald Trump is President of the United States, however, these political charlatans are pursuing an utterly hypocritical strategy: in disputes between the Trump administration and foreign leaders and interests, they invariably side with the foreigners; simultaneously, they falsely accuse Russia and Trump of conspiring to rig an American election, and they thus elevate a contrived discourse about “foreign meddling” to the top of the public agenda.

It is time to call these hucksters on their deceit and duplicity. Either the media and Democrats should start taking all forms of foreign meddling seriously, even when they are designed to hurt Trump and Republicans, or they should cease their moralizing altogether. As things stand now, the disconnect between the feigned, chest-thumping patriotism and the actual globalist pusillanimity and treachery of these scoundrels is shocking to behold.

And here's the American Greatness version: