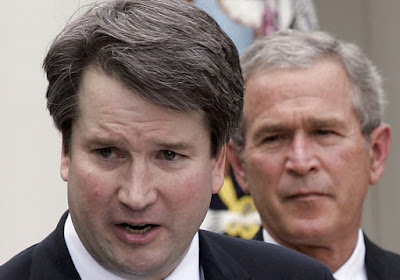 Friends, my latest article addresses conservative criticism of Brett Kavanaugh, President Trump's latest pick for the Supreme Court.  I believe this criticism to be overblown, as I explain in my latest article, coming soon to American Greatness.  Will Kavanaugh be the firebrand reactionary zealot that you and I pine for?  That I can't guarantee, but I do believe he'll be a distinct improvement on Anthony Kennedy, and that's my personal litmus test.  Kavanaugh passes!  My hope, though, is that the Supreme Court is only starting its journey down the Golden Road of Trumpism.  Time will tell.


Brett Kavanaugh Isn't Defined By The Swamp That Spawned Him

Conservatives all across America are asking themselves: who is Brett Kavanaugh, and what kind of Supreme Court Justice will he make? The answers are myriad and mostly speculative.

Judge Andrew Napolitano, a senior judicial analyst for FoxNews, has written an article about why he is “deeply disappointed” in President Trump's decision to nominate Kavanaugh. While some of his concerns may be valid, Napolitano's main argument – that Kavanaugh is tainted by his associations with the DC swamp – makes little sense.

First, Napolitano defines the swamp as “the permanent government and its enablers in the legal, financial, diplomatic and intelligence communities in Washington.” Conveniently, therefore, Napolitano excludes the media from the swamp, although surely the Washington establishment relies first and foremost on its “enablers” in the mainstream media to keep it in power. Napolitano himself, as a FoxNews analyst, could be accused of swampiness. My first reaction to Napolitano's denigration of Kavanaugh as a swamp monster, therefore, is: “Let he who is without sin cast the first stone”.

Furthermore, we should understand that “the swamp” is ill-defined. As Napolitano admits, it seems never to include anyone we like. For conservatives, an outspoken liberal politician or a Trump-hating bureaucrat or FBI agent is a creature of the swamp, surely, but a right-minded old hand in Washington is instead a “seasoned veteran”. This just means that “the swamp” is a largely pejorative concept, and often those who employ it are engaged in plain, old-fashioned name-calling.

Now, if there is any objective, literal meaning to “the swamp”, it describes a Washington elite that is interconnected, resistant to meaningful change, and corruptly uses governmental power and federal largesse to protect and reward allies and punish and undermine perceived enemies. DC politicians vary in the degree to which they might be identified with such swampy behaviors and attitudes, but one thing is clear: both parties are equally befouled.

We must further acknowledge that there are very few people in positions of influence in our government who are utterly divorced from the swamp, or who could be described as moral purists or true political newcomers. President Trump appointed several DC outsiders to his cabinet, yes, but even he – the swamp monster's mot-feared natural predator – had to add many “seasoned veterans” to his administration. Without them, and their experience, the Executive Branch simply could not function. Does this mean that Trump's criticism of the swamp is disingenuous? Not necessarily, because, from a practical standpoint, no swamp can be drained unless you enter it first...

The most important point is this: long-time Washington ties, and even the occasional lapse into swampy attitudes and behavior, do not and should not exclude a politician, or a judge, from recruitment into President Trump's campaign to reinvigorate America. The over-hasty denigration of political figures who are deeply embedded in the Washington establishment risks the loss of their knowledge, influence, and experience, and it neglects the obvious fact that, while they can be powerful enemies when provoked, they can also be invaluable allies when harnessed to a noble cause. Mitch McConnell, for example, may be about as swampy and sly as a Senator can get, but he has also overseen a successful strategy to prevent the judiciary from falling into liberal hands. We owe him a huge debt of thanks. I, for one, will gladly hold my nose and overlook the vile emanations of the swamp to achieve historic victories like these.

Judge Napolitano goes on in his article to suggest that Kavanaugh will be a disappointment as a Supreme Court Justice because he is infected with the “values” and the “culture” of the swamp. Kavanaugh believes, for instance, that Americans' rights to privacy should be weighed against the imperative of national security. He believes that the President should be shielded from some types of lawsuits while in office. Napolitano interprets these views to mean that Kavanaugh will support an unchecked, potentially totalitarian “deep state”. Napolitano even suggests that Kavanaugh is somehow complicit in deep state efforts to undermine Trump himself, but all of this is a gross over-reading of the few signals we presently have regarding Kavanaugh's mindset and his legal and constitutional philosophy. Simply put, Kavanaugh has never ruled on most truly momentous issues, nor has he enunciated clear views on most of them. We should suspend judgment, therefore.

We also shouldn't assume that, because Kavanaugh sometimes associates with swamp monsters, he is captive to their “values”. Does Judge Napolitano, who teaches classes at Brooklyn Law School, accept and practice, for this reason, the radical PC “values” of academia? Of course not. It would be silly to suggest that he does. No one is defined exclusively by the company he keeps.

It might also be prudent to consider the possibility that, if Kavanaugh is in any sense a swamp monster, with a predilection for establishment “culture”, the experience of the next few weeks and months, when large parts of the swamp will be working furiously to malign and destroy him, may cure him definitively of his swamp fever. Who can say? In any case, Kavanaugh's “values”, and the degree to which they may change over the years, are largely unknowable. His decisions, on the other hand, are a matter of record, as are his partisan political leanings, and these ought to make conservatives pleased and confident.

In the end, the fact that President Trump has nominated an experienced, mildly swampy jurist with connections to the Bushes should not concern conservatives and lovers of liberty as much as Napolitano suggests. Every objective reading of Kavanaugh's record has tended to indicate that he will be a Supreme Court Justice considerably to the right of Anthony Kennedy, who he will replace. It is hard, therefore, to see his elevation to the Court as anything but a win.

Conservatives, therefore, should support Kavanaugh without misgivings. They should also keep in mind that, if they would have preferred a more forceful, fervent conservative judge like Amy Coney Barrett, she may yet get her chance.

When it comes to Trumpifying the judiciary, Gorsuch and Kavanaugh are a good start, but arguably the best is yet to come.

And here is the American Greatness version: