A Supremely Delightful 4th of July 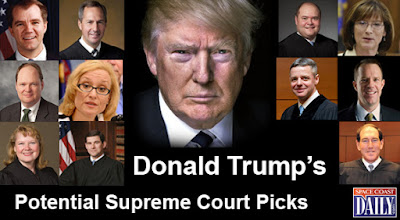 Friends, let me be the first to wish all of you a very happy July 4th, and to wish the U.S. of A. the very happiest of birthdays! This Independence Day, we have more than usual to be thankful for, because, if President Trump follows the Neil Gorsuch playbook, the Supreme Court, the highest court in the land, is about to get a whole lot greater...  Sure, retiring Justice Anthony Kennedy was okay, but we can do better, and we will, I feel sure, very soon.  My latest article discusses what a historic opportunity this Supreme Court pick is.  America will never be the same, and the lefties are...apoplectic.  Clearly we're doing something right!


A Supreme Triumph for Trump Supporters

When thoughtful conservatives and Republicans voted for Donald Trump in 2016, they did so in part because they knew that he would be among the nation's most consequential Presidents, regardless of his occasional lapses in decorum or the steep learning curve he might face. This is because conservatives knew that the next President would be called on to fill the huge backlog of judicial vacancies that accumulated during the last years of Barack Obama's presidency. In addition, many other federal judges were approaching retirement age, so it stood to reason that the opportunity to remold the judiciary would be vast. Most importantly, given conservatives' narrow 5-4 majority on the Supreme Court, whomever was elected in 2016 would literally decide, on his or her own, the country's fate, at least in a legal and constitutional sense. The stakes could not have been higher.

Trump won, and the American Right breathed a collective sigh of relief. One could even argue that Donald Trump, by slaying the Clintonian dragon, saved American democracy. Why? Because, if Hillary had prevailed, she would have appointed judges who would have interpreted the law and the Constitution in a typically leftist fashion – that is, they would have disregarded precedent, twisted the Founders' words, and conjured new legal standards out of thin air, if need be, to achieve their goals of “social justice” and leftist primacy. With a liberal majority on the Supreme Court, future elections in America would arguably have been irrelevant, because no conservative electoral success would have changed the fact that the country would have been ruled by black-robed radicals. These power-grabbing judges would have quickly quashed any conservative law or policy (or election result?) that offended them. That would have been the end of liberty and government by the people. Trump saved us from this miserable fate, and that is to his eternal credit.

In his first foray into judicial nominations, Trump choose Neil Gorsuch to replace Antonin Scalia on the Supreme Court – a fantastic pick in every sense: ideologically, in terms of his youth (and thus his staying power on the Court), and because of his professionalism and poise.

Happily, Trump's positive influence on the Supreme Court won't end there. With his latest pick, Trump can actually reshape the Court, as opposed to merely maintaining its long-standing moderately conservative bent. He can meaningfully reorient the federal judiciary towards fidelity to the law and the Constitution, as well as a literal and historically-sound interpretation of their meaning. We have an opportunity, therefore, to overturn the innumerable legal travesties that have emerged from the Court over the last several decades.

Time and again, the Court has expanded the authority of the federal government, especially the judiciary, and flouted the will of the people and their elected representatives. It has further eroded the powers of the states, and dictated the legalization and normalization of immorality in ways that would have appalled the men who wrote the laws, clauses, and amendments from which the Courts' rulings allegedly stem. We simply cannot overstate the importance of reversing this execrable trend and promoting a renaissance of constitutionalism and the rule of law. Ultimately, the health, well-being, and even the survival of our Republic depends on it. Assuming that President Trump eventually gets to appoint even one more additional Supreme Court Justice – say, a replacement for one of the four liberal Justices still serving – then the reorientation of the Court would become not only profound but practically irreversible.

The Left appears to understand the dangers it faces. A recent article in The Daily Beast entitled “Anthony Kennedy, You Are a Total Disgrace to America” (!) confirms this. The author, Michael Tomasky, acknowledges the extremely slim odds of the Senate rejecting Trump's nominee. As he observes, the playbook for judicial confirmation has long been clear: assuming a judge says as little as possible, and nothing of substance, during his or her confirmation hearings, Senate approval is a foregone conclusion. Moderate Senators, including red-state Democrats, will have no obvious reason to deny the President his constitutional prerogative of selecting judges for the high court. Ergo, barring a dramatic error on the part of the administration or Trump's nominee, the Supreme Court will soon include two “Trump conservatives”. Hallelujah!

One further result may be, as Tomasky perceives, that the Left's crusade to remove Donald Trump from office may definitively falter. Why? Because it is difficult, if not fanciful, to imagine that the House of Representatives would vote to impeach him, and two-thirds of the Senate would vote to convict and thus eject him from the Oval Office. In all likelihood, such machinations would only stand a chance of success if special counsel Mueller was aided in his efforts by the Supreme Court itself. Just as unfavorable Supreme Court decisions ultimately spelled the end of Richard Nixon's presidency, so too could a stern rebuke from a conservative-leaning high court be the (theoretical) deathblow to President Trump. If Anthony Kennedy is replaced with a hard-line conservative, however, that scenario will become even less likely than it is now. In short, it appears that anti-impeachment forces will for the foreseeable future enjoy clear control of two of the three branches of government (the presidency and the judiciary), and they may well maintain their dominance in the third, the Congress, if the much-ballyhooed “blue wave” fails to crest. Thus, the slow-moving coup against President Trump may peter out into nothingness. Good!

Tomasky forecasts other ramifications of an additional Trump appointee on the Supreme Court, including the overturning of Roe v.Wade and Obergefell v. Hodges, meaning that the sensitive issues of abortion and gay marriage would once again be addressed by the individual states as they see fit. To liberals, this is the stuff of the End of Days: they insist that we must have total national conformity with leftist dogma on these issues, or else we will be plunged into abject medieval darkness. For those who remember what life was like in the pre-Roe and pre-Obergefell eras, however, the future will not look so dire. In fact, it could look decidedly brighter, depending on one's moral compass.

All this can be credited to President Trump, yes, and to Justice Kennedy, who wisely chose to retire at this specific moment. More accurately, though, it is the American people who deserve plaudits and gratitude at this seminal moment in our country's history. It is they, after all, who elected Donald Trump as our President in 2016 (against the “advice” of the mainstream media), and it is therefore they who saved us from legal/constitutional oblivion, and created the potential for a rebirth and rediscovery of the first principles and foundations of our Republic.

For years, conservatives have only dared to hope for one thing from the Supreme Court: that it would cease to do further damage to our nation, its system of government, and to American society and morals. Now, we can hope for more: we can aspire to point the U.S. in a new direction, one of our (and the Founders') choosing. It is, without a doubt, an exciting and triumphant moment.

And here's the Townhall version: