Is the Left Coming for...You? 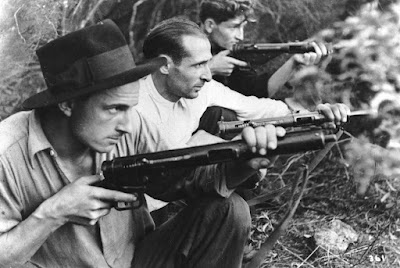 Yes, I know -- the title to this post is a tad provocative, but it's a germane question, I feel.  After all, the Left trumpets itself as "the Resistance" these days, and the Resistance (in German-occupied France) was a terrorist organization that killed thousands, mostly Frenchmen.  It was also a group staffed primarily with loyal Stalinists.  I kid you not.  And these are the people the modern Left is embracing as heroes.  The bigger point is this: if Trump=Hitler, and that's the clear implication of much leftist propaganda these days, then surely ANY means of resisting Trump, including violence against his supporters, is justified...  Thus far, most leftists, thankfully, have been either too dense or too cowardly to follow through on the logic of their own radicalism, but how long will this last?  Steve Scalise and Rand Paul know that liberal rage can break out into violence most unexpectedly.  All I'm saying is that we conservatives need to be on our guard, because we are HATED with a passion, and hatred can lead to violence.  Be prepared to duck, at the very least!

This is just one of many topics I discussed with Brian O'Neil on the latest Newsmaker show. We also covered the threat posed (or not posed) by Russia, the Mueller investigation, the wider phenomenon of "foreign meddling" in elections, Governor Cuomo's political prospects on the national stage, the rise of "democratic socialism", and attitudes to the death penalty.  Don't miss it!

https://www.youtube.com/watch?v=yAjZov9L0WM&feature=youtu.be
Posted by Nicholas Waddy at 11:51 AM