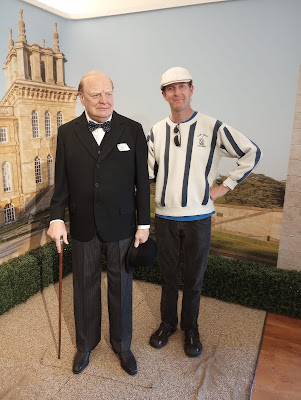 Friends, when Sir Winston Churchill heard that I was being entertained by Admiral Nelson, he refused to be upstaged.  He invited me to the Spencer-Churchill family home, otherwise known as Blenheim Palace.  It was a nice change from the guest wing at Buckingham Palace, where I felt cramped and the Queen's snoring left me a tad narky.  As for Winston himself, he wasn't as animated as I had expected, but, for a man of 147, he's doing all right.  He's got the "stiff upper lip" down to a science.  None stiffer, I daresay!

In other news, check out these intriguing stats on continuing declines in college enrollment nationwide.  Yikes!  In recent years, the federal government has plowed tens of billions of dollars into higher ed -- a covert subsidy to the most left-leaning institution in America -- and that has deferred any pain and sacrifice that this enrollment crisis might otherwise have caused.  Can government funds hold off the day of reckoning forever, though?  One assumes not.  In other words, hundreds of colleges and universities -- some of them in your backyard -- could face financial ruin and closure in the years ahead.  And maybe that's for the best.  I mean, demographics are changing, and the value of a college education isn't what it used to be.  More to the point, the price isn't what it used to be, and I'm not just talking dollars and cents.  These days, to obtain a degree, one more or less has to become a fellow-traveler to neo-Marxists.  I say: no sale!

Posted by Nicholas Waddy at 7:21 PM