Is the West Having Second Thoughts About Its "LIttle Brother" Ukraine? 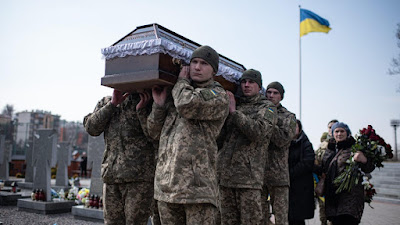 Friends, a couple of months ago, pretty much everyone in the West who consumed the mainstream media version of the Russia-Ukraine War had talked themselves into an expectation that Russian forces were about to collapse, and Ukrainian victory was imminent.  Well, now that prediction looks darn shaky.  Ukrainians are being pushed back, slowly and steadily, in Donbas, and, because of Russia's superiority in heavy weapons, Ukrainian security forces are taking lots of casualties.  What's more, it's inevitable that Western voters will sour on the conflict and grow more skeptical, as the losses and costs mount, and as energy prices remain high.  Check out this article, therefore, that hints at a possible change of direction in the Biden Administration.  The weapons and funds keep flowing, sure, but Biden appears to be thinking of an endgame that leaves Russia in possession of large swathes of Ukrainian territory.  And, like it or not, isn't that the only probable outcome here, assuming that the Ukrainian state even survives?  My guess is that a lot of mixed messages are flowing these days between President Zelensky and his Western counterparts.  A messy war may get messier!

Was a ruckus at the Capitol foreseeable on January 6th, 2021?  I'd say so!  Apparently there was plenty of intel in the weeks leading up to the fateful day.  That begs the question: why would leaders in Congress refuse the offer of National Guard reinforcements to bolster security?  This article doesn't answer that question, but my guess -- and it's only a guess -- is that too many Democrats find soldiers and policemen triggering, and too many of them suspected that federal troops would be used by President Trump to instigate a coup.  Frankly, though, with or without National Guard soldiers present, it should have been possible to foresee a potential disturbance, and then to contain it.  The security failures on January 6th were inexcusable, in my humble opinion.

Finally, the title of this article speaks for itself!

Posted by Nicholas Waddy at 5:04 PM