There but for the Grace of God go you or I... 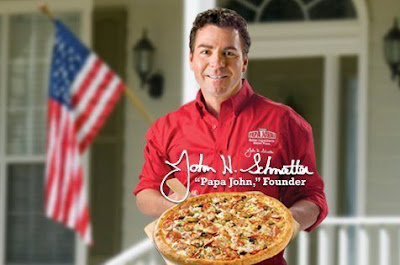 Patriots, conservatives, and even students of human nature will want to pay close attention to the downfall of John Schnatter, a.k.a. "Papa John" of pizza fame.  Not so long ago Schnatter committed the barely-pardonable sin of remarking that the NFL's brand had been harmed, and his pizza sales had fallen, because of the controversy over NFL players' decision to kneel during the national anthem.  Schnatter was, of course, only stating the obvious, but that didn't stop the NFL from terminating its relationship with Papa John's, even after Schnatter had resigned as CEO.

All of that is small potatoes compared to the recent dust-up.  Schnatter, in a marketing conference call, unwisely used the n-word, but not to denigrate blacks -- he was using it to illustrate the profound changes that have occurred in people's racial attitudes.  He also referred to past instances of lynching targeting "African-Americans" -- not in a way that implied his approval, but his disapproval.  Nonetheless, some people participating in the call were offended, and...Schnatter is toast.  Papa John's has severed all ties with him, and it is attempting to erase even his memory at the company (he's the founder, inconveniently).  But that's not all.  Not happy with destroying the image and career of a man not even accused of racism, but mere insensitivity, the Left is demanding that Papa John's, even after its disavowal of Schnatter, must be punished as a company.  Numerous NFL and Major League Baseball teams are ending their relationships with the pizza chain.  Every single employee of Papa John's, it seems, must suffer for John Schnatter's sins.  Wow!

And what is Schnatter's principal sin?  Being white, naturally.  The n-word is offensive, yes, but let's not kid ourselves -- black people use it often.  Comedians use it.  Leftist social critics use it.  Assuming you have the right pedigree, you can use the word without undue risk to your reputation or your livelihood.  Schnatter, though, is a white male who appears to harbor some glimmerings of patriotism (thus his insistence that NFL players should stand for the anthem), and he may even be -- gulp! -- a conservative or a Republican.  Clearly, he must be destroyed at all costs.

Why does any of this matter?  Personally, I don't know John Schnatter from Adam, nor have I so much as sampled his pizza.  That isn't the point.  The point is that a man, even a powerful one, can these days be scorched simply for failing to abide by PC values and injunctions with sufficient care and thoroughness.  As a white male, if you step out of line, even for an instant, the leftist horde is done with you.  Have you performed a litany of worthy deeds throughout your life?  Who cares.  Are you, 99% of the time, subservient and reverent towards the twin gods of Diversity and Inclusion?  Not good enough!  The Left demands total compliance -- or annihilation!

The other reason that these stories matter is fairly obvious: Schnatter's fate will intimidate, as it is meant to, other corporate leaders into towing the line of leftist orthodoxy.  If we allow this sort of nonsense to continue, well, we can kiss the idea of winning the "culture wars" good bye, because our fate is sealed.

Friends, the inmates are running the asylum.  Don't put a foot wrong -- that's my advice, because the PC crowd is taking no prisoners, and you and I are already on their naughty list.  Watch out!  And, if you can (without taking direct fire from the PC goon squad), fight back!

Posted by Nicholas Waddy at 5:43 PM