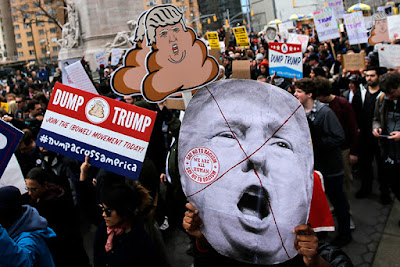 Friends, while the only lesson that the mainstream media is taking from the recent indictment of 13 Russians for election meddling is that the 2016 election was invalid, the truth is that it is becoming more and more apparent that the real Russian goal was NOT to elect Donald Trump.  That may have been a secondary goal, but the primary goal was to pit Americans against one another and cause maximum chaos.  In that regard, the Russian campaign was stunningly successful, and Democrats and liberals have done more than anyone to make it so.  Why did the Russians sponsor anti-Trump rallies after the election?  Why did they boost support for Bernie Sanders?  Why did they pay for ads for and against Black Lives Matter?  Is it because they were in bed with Trump all along?  No!  It's because they were and are opportunists, who view a weak USA as an asset for Russia.  Thus, Americans who try to undermine confidence in our election system (which worked flawlessly) and our President (who had no involvement) are doing the Russians' work for them.  Stop the nonsense, I say!  Accept that Donald Trump won the election, Russians clumsily tried to interfere in it (as did many other bad actors, including the Democratic Party), and move on.  What do you think?